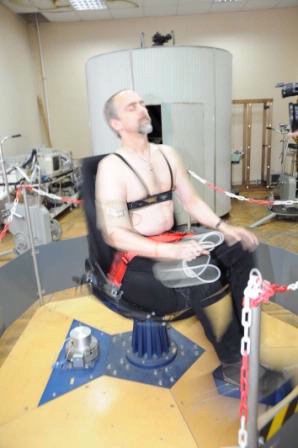 NEW YORK - The next spacetourist bound for the International Space Station (ISS) is taking a breather fromspaceflight training as he prepares to ride a Russian rocket toward theorbiting laboratory later this year.

American computergame developer Richard Garriott, 46, has returned to the U.S. after an intensesix weeks of Russian classes and Soyuz spacecraft training for his plannedOctober flight to the ISS. The one-month rest comes between a series of tripsto Russia?s cosmonaut training center in Star City, where he and backup NikHalik have been wading through the intricacies of Soyuz spaceflight.

?In theSoyuz, all of the buttons and things are labeled in Russian, so you need to beable to read and understand a few technical words,? Garriott told SPACE.com Friday,adding that he spent four hours each day learning the new language. ?There?s noquestion that learning Russian is a little bit of a challenge.?

Based inAustin, Texas, Garriott is paying about $30 million to fly to the ISS with twoprofessional astronauts in October under an agreement between Russia?s FederalSpace Agency and the Virginia-based tourism firm Space Adventures, whichbrokered the flight. He plans to conduct Earth observations and protein crystalgrowth experiments during his mission and launched an educationalcontest for British students to devise their own tests that he couldperform.

?One of thethings that I didn?t know was there while we were kicking around was that theyhave a wonderful planetarium,? Garriott said, adding that he and Halik hope tovisit the planetarium during their next training session. ?It?s a surprisinglyopen place.?

Halik, 38,is an Australian entrepreneur who is paying $3 million to serveas Garriott?s backup and experience genuine spaceflight training.

?Though Nikand I had not really known each other before training together in Star City, itturns out we?ve lived very parallel lives,? said Garriott, adding that both heand his backup have taken adventure trips to Antarctica, rode aboardsubmersibles down to the wreck of the Titanic, experienced weightless onaircraft and flown Russian MiG jets. ?Because we have that same adventurousspirit and similar background, training together has been actually really convenientand also given us a well-rounded opportunity to share this experience together.?

Garriottdeveloped the Ultima computer game series and co-founded the Origins Systemscomputer game company as well as the North American branch of the online game developerNCsoft. He hopes to spend his month off from training to catching up withhis work. But, Garriott added, he did happen to be in Russia training forspaceflight in early February, when his most recent game ?Tabula Rasa? hitstores in Moscow in its Russian packaging.

?Getting achance to sit down with the players was actually great fun for me and hopefullythey enjoyed it as well,? Garriott said.

Garriotthas expressed an interest in paying an extra $15 million to stage the firstspacewalk by a private spaceflyer, though whether the activity could cometogether in time for his flight is up in the air. He has already been fittedfor his Russian Sokol spacesuit, the partial pressure garment that he will wearduring launch and landing, but not one worthy of a spacewalk.

?Of courseI would love to do it if it could be done,? said Garriott, adding that he hopesto put together some sort of simple, feasible science experiment in case itopportunity arises.

Garriottwill be the sixth paying visitor to the ISS, but the first Americansecond-generation spaceflyer to reach orbit. His father, Owen Garriott, is aretired NASA astronaut who flew aboard the U.S.Skylab space station and shuttle Columbia, and will serve as chiefscientist for the coming spaceflight.

?One of themore interesting aspects of working with my father on this flight is what anappreciation it?s given me for the challenges that my dad faced during his timewith NASA,? the younger Garriott said. ?The sense of urgency to get all yourducks in a row and get things lined up appropriately has been high.?