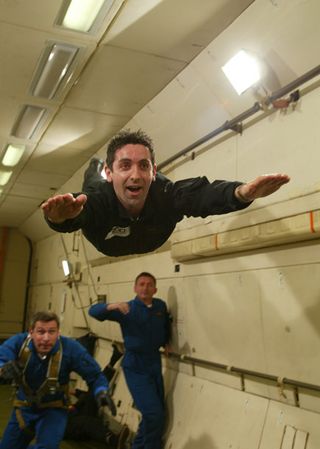 AnAustralian entrepreneur and self-described ?thrillionaire? has signed on as thebackup space tourist for the next paid flight to the International SpaceStation (ISS).

Halik, 38,is paying $3 million to train alongside Garriott as a backup spaceflyer.

?I amthrilled to be chosen as Richard?s backup,? Halik said in a statement. ?I havedreamed of flying to space ever since I was a young boy.?

Halik isthe founder of Financial Freedom Institute, Money Masters and other firms, andpenned the autobiography ?The Thrillionaire? to be released in March.

He is a veteranadventurer and has chased tornadoes across the U.S. Midwest, dived down to thesunken wreck of the Titanic and led expeditions to Antarctica, Africa and the Amazon. Halik is also an experienced mountaineer with a planned Everestclimb set for next year, Space Adventures officials said.

As Garriott?sbackup, Halik will participate in traditional spaceflight trainingactivities and will also be featured in a documentary television series, SpaceAdventures officials have said.

?Throughhis participation as a backup crew member, Nik will experience firsthand howour clients train for spaceflight and he, himself, will be certified as a?fully-trained cosmonaut? and will be named to an official space mission crew,a distinction that less than 1,000 people have ever had,? said Space Adventurespresident and CEO Eric Anderson.

SpaceAdventures is the only firm offering orbital flights for paying customers underagreements with Russia?s Federal Space Agency, which routinely launches Soyuzspacecraft to ferry new crews to the ISS.

Garriott, acomputer game developer, is the son of former NASA astronaut OwenGarriott and will be the first second-generation U.S. spaceflyer when helaunches later this year. He is paying about $30 million for the experience.

Halik?s $3million payment to serve as Garriott?s backup can also be used as a credit fora future orbital or lunarspaceflight, Anderson has said.

?Nik and Ihave similar exploratory backgrounds and we?ll have many stories to shareduring our time together in Star City,? said Garriott, referring to the home of Russia?s cosmonaut training center. ?I look forward to train with himbecause not only is it meant to prepare myself for flight, but also to prepareNik for his future flight. I definitely will be on-hand for his eventuallaunch to space.?

Halik,meanwhile, said that is ultimate goal extends beyond Earth orbit.

?I watchedrecordings of Neil Armstrong?s first steps on the moon?s surface and I vowed tofollow,? Halik said. ?The space station will be my first stop, with my eyesfocused on the moon.?