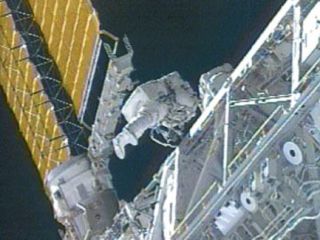 Expedition 16 astronaut Dan Tani participates in a Dec. 18, 2007 spacewalk near the International Space Station's starboard solar arrays. The helmet of station commander Peggy Whitson can be seen just above him.
(Image: © NASA TV.)

Astronautsaboard the International Space Station (ISS) are preparing for a potential spacewalkthis month to replace a broken motor at the base of one of their orbital lab's expansivesolar wings.

Station commanderPeggy Whitson and flight engineer Dan Tani could make the repair as earlyas late January, but that plan depends on when NASA's space shuttle Atlantislaunches toward the ISS with a new European laboratory, NASA officials havesaid.

"We'lljust keep getting ready," Mike Suffredini, NASA's space station programmanager, told reporters late Thursday. "And then as we get close to thetime for the actual [spacewalk] we'll see where our shuttle friends are."

Atlantisand its STS-122astronaut crew are currently slated to launch no earlier than Jan.24 on an11-day construction mission to deliver the European Space Agency's Columbuslaboratory to the ISS. The mission has been delayed since early December byglitches with a fuel gauge sensor system in the shuttle's 15-story externaltank. Engineers are replacing a suspectelectrical connector and hope to ready Atlantis for launch later this monthor, more likely, the first week of February.

"If itdoes turn out that STS-122 can be launched in January, a spacewalk to replacethe [solar array motor] would be postponed until after the shuttlemission," NASA spokesperson Pat Ryan said Friday during daily ISS missioncommentary.

Suffredinisaid that while the current glitch, as well as the contamination of a large ISSgear that rotates both of the station's starboard solar arrays like apaddlewheel to continuously face the sun, have impacted the station's electricity-generatingabilities, the outpost has enough power supplies to wait until after Atlantis'flight to perform the motor replacement.

At theheart of the planned spacewalk repair is a motor driving a beta gimbal joint thattilts one of the station's two starboard solar wings towards the sun to helpmaximize power production. The joint suffered a series of electrical shorts lastmonth, prompting Tani and Whitson to inspect its power and data cables for micrometeoritedamage duringa Dec. 18 spacewalk. When the inspection found no obvious signs of damage,engineers began to suspect the joint's motor — known as a Bearing Motor RollRing Module.

The twoU.S. astronauts retrieved a spare beta gimbal joint motor from storage insidethe ISS on Wednesday to prepare it for the eventual repair.

Tani, whoarrived at the ISS in late October, has been trained for the solar array motorreplacement. But he is scheduled to return to Earth with the STS-122 crewaboard Atlantis, which will ferry his replacement — Frenchastronaut Leopold Eyharts, of the ESA — to the ISS.

If thesolar array motor spacewalk occurs after the upcoming shuttle flight, ISS flightengineer and Russian cosmonaut Yuri Malenchenko will fill in for Tani andaccompany Whitson on the repair job, NASA officials said. The spacewalk will mark the fifth of the station's current Expedition 16 mission.