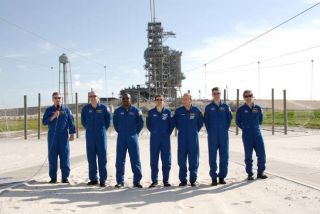 A team ofastronauts on Earth and in orbit are poised for a December spaceflight to haula new European laboratory at the International Space Station (ISS).

The seven astronautsof NASA's shuttle Atlantis are training to launch toward the ISS with theEuropean Space Agency's (ESA) Columbus laboratory as the station's Expedition16 crew gears up for two planned spacewalks this week to ready the outpost forthe new addition.

Frick andhis STS-122 crew are due to launch spaceward on Dec. 6 on an 11-daymission to deliver Columbus to the ISS. They will climb into the 100-tonAtlantis orbiter on Tuesday for a dress rehearsal of their launch dayactivities.

"Sofar, we're looking right on schedule for Dec. 6," Frick said. "Thereal challenge is on the station side. They've just had a ton of work to getdone since [the last flight]."

Commandedby NASAastronaut Peggy Whitson, the space station's three-person Expedition16 crew is currently in the midst of a packed month of spacewalks, robotics andmodule outfitting to ensure the orbital laboratory's newHarmony connecting module is ready for Atlantis's arrival nextmonth. The station crew moved Harmony to the front of the outpost's U.S.Destiny module last week.

Whitson andflight engineer Dan Tani are now set to stage a pair of spacewalks, on Tuesdayand Saturday, respectively, to fold the Harmony node into the station's powerand cooling systems. The spacewalks must go smoothly to allow December'sshuttle mission to launch, NASA has said.

"These[spacewalks], I expect, will be tough," Tani told Chicago's WBBM Radioin a Monday interview broadcast on NASA TV. "Plus, we know that we are inthe critical path to getting the node fully activated."

Tani andWhitson equipped Harmony with a shuttle docking port last week before moving itto the front of Destiny using the station's Canadarm2 robotic arm. The new connectingnode will serve as the hub for the ESA's Columbus module and Japan's Kibolaboratory.

"We'relooking forward to the work ahead," Whitson said. "We know it's goingto be challenging, but we're prepared."