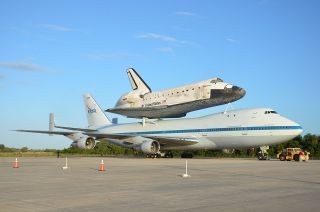 The shuttle Discovery — NASA's most-flown space plane — will take one last flight this week, but will never leave the planet again. The shuttle's final mission is a piggyback ride atop a jumbo jet so Discovery can take its place as a space icon at the Smithsonian Institution.

The shuttle is due to leave its Florida home for good early Tuesday (April 17), when the modified Boeing 747 jet carrying Discovery will leave NASA's Kennedy Space Center in Cape Canaveral en route for Dulles International Airport. If all goes well, the shuttle will arrive in Washington, D.C., later that day and roll into its oversize display case (actually a museum hangar) on Thursday at the Steven F. Udvar-Hazy Center, part of Smithsonian's National Air and Space Museum.

The flight to Washington is the last time Discovery will ever take to the skies. Discovery returned from its final space mission in March 2011, and NASA retired the entire space shuttle program for good in July of that year. With 39 spaceflights and about 365 total days in space during its career, Discovery was NASA's workhorse orbiter during the 30-year shuttle program.

In a rare move, NASA plans to fly the piggyback shuttle over a low tour of Washington, taking it over the National Mall, Reagan National Airport and the National Harbor before touching down. The flyover is expected to be visible from many points around Washington between 10 a.m. and 11 a.m. EDT (1400 to 1500 GMT). [How NASA Flies Shuttles on 747 Jets (Photos)]

The shuttle-spotting map of Washington here shows where Discovery may be visible from. Shuttle-watchers can even post Twitter updates about seeing Discovery using the hashtag #spottheshuttle to share the experience.

The entire schedule for Discovery's ferry flight to Washington and its photo op flyover is weather-dependent, and times may change as conditions warrant, NASA officials have said.

Discovery is one of three space shuttles (and one shuttle prototype) moving to museums this year as part of NASA's bid to display the spacecraft for posterity.

Twenty-one museums and institutions applied for rights to display a shuttle — each pledging to cover the estimated $28.8 million in associated costs — but with only four vehicles available, just a handful eventually won. NASA announced the winners on April 12, 2011, on the 30th anniversary of the space shuttle program's first flight.

At the Smithsonian, Discovery will replace the prototype shuttle Enterprise, which was used for landing tests but never flew in space.

Enterprise, meanwhile, will be delivered to New York City on Monday (April 23) to be prepared for display at the Intrepid Sea, Air and Space Museum, a floating museum built on the World War II aircraft carrier U.S.S. Intrepid.

Later this year, NASA's two other space shuttles — Atlantis and Endeavour — are expected to take their own trips to museum retirement homes. For Atlantis, the trip won't include a piggyback flight; the shuttle will be moved from its hangar to the nearby Kennedy Space Center Visitors Complex for eventual display.

Endeavour, however, will take the longest trip to reach its final destination. NASA granted Endeavour, which is the space agency's youngest shuttle, to the California Science Center in Los Angeles.

NASA originally built five shuttles that launched into space. The Challenger and Columbia orbiters were lost in tragic space accidents in 1986 and 2003, respectively.

With the space shuttle fleet retired, NASA is looking ahead to a new mission of sending astronauts to an asteroid by 2025, then aiming for a manned Mars mission in the 2030s.

To do that, the space agency is developing a new deep-space capsule, called the Orion Multi-purpose Crew Vehicle, along with a giant rocket (the Space Launch System). But to reach low-Earth orbit — where the space shuttles flew — NASA is relying on Russia to ferry astronauts to and from the International Space Station until new private spacecraft built by American companies become available.

NASA has doled out some funding to several private companies, including SpaceX, Boeing, Blue Origin and Sierra Nevada Corp., to support their work on new spaceships to keep Americans flying in space.

Editor's Note: If you snap an amazing photo of Discovery flying piggyback over Washington, D.C., and want to share them with SPACE.com for a story or gallery, send photos and comments to managing editor Tariq Malik at: tmalik@space.com.