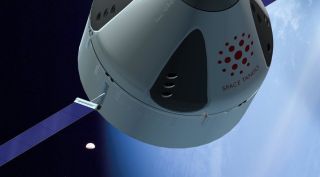 The facility, called ST-42, will be a free-flying spacecraft sent into low Earth orbit with robotic systems onboard to produce advanced materials, biomedical devices and other high-value products. ST-42 is likely to remain in orbit ten to 30 days and possibly longer before reentering the atmosphere, Twyman Clements, Space Tango president and chief executive, told SpaceNews.

Space Tango currently conducts research, development and pilot manufacturing in TangoLab-1 and Tango-Lab-2, general research facilities housed in lockers in the International Space Station's U.S. national laboratory. To date, Space Tango has sent into orbit 53 payloads with a total of 88 experiments for a variety of customers including Budweiser, The Quest Institute for Quality Education and Airbus Defense and Space. [Astronauts' Amazing Space Station Views For 20th Anniversary (Gallery)]

ST-42 is "a logical extension of the work Space Tango is doing on ISS now," Clements said. "We are doing research, taking research into pilot manufacturing and finding areas where raw materials go up, microgravity is a value-add and finished products of significant value come down."

Clements declined to comment on the cost of ST-42 but said the firm's calculations show it is economically feasible to build and launch because it will not require docking mechanisms or the environmental control systems like capsules designed to carry people. Space Tango has not raised money for ST-42, Clements added, but is raising money for its current activities and earning revenue from its ongoing work.

"We are announcing this so our customers and the broader industry can see there's an endpoint to the work we are doing," Clements said. "We seek to partner with investors and other groups to fund this investment."

Space Tango plans to build multiple versions of ST-42 with a consistent exterior design and interiors adapted for specific applications. The capsule's diameter will be roughly 2.1 to 2.4 meters, Clements said.

"In material science, where we need less ancillary equipment, we want to build something to maximize mass up and back," Clements said. In contrast, biomedical platforms will require different interior configurations and equipment, he added.

Companies are likely to produce fiber-optics, carbon nanotubes and silicon wafers in ST-42, Clements said. Biomedical applications include retinal implants. Space Tango is working with LambdaVision, a Farmington, Connecticut, company preparing to test whether it can produce the implants, which may restore vision, in microgravity.

Space Tango is a spinoff of Kentucky Space, a nonprofit consortium universities and public and private organizations based in Lexington. In October, Space Tango formed a subsidiary focused on the plant biology and properties of hemp.