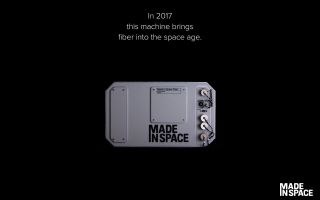 California-based company Made In Space plans to test the production of a superefficient optical fiber aboard the International Space Station in 2017.
(Image: © Made In Space)

Society is about to take another big step into the age of space-based manufacturing.

Early next year, California-based startup Made In Space plans to launch a machine to the International Space Station (ISS) that will produce ZBLAN optical fiber.

ZBLAN has the potential to be much more efficient than the silica-based fiber currently used in the internet and telecommunications industries, but it's tough to make here on Earth because the planet's strong gravitational pull induces imperfections in the ZBLAN crystal lattice, Made In Space representatives said. [3D Printing: 10 Ways It Could Transform Space Travel]

So the Made In Space machine will churn out ZBLAN in the microgravity conditions aboard the ISS, and the product will soon be returned to Earth for testing. If everything goes well, and there's sufficient demand for the space-made ZBLAN, the company will eventually build and launch a larger-scale production facility, and perhaps additional machines that will manufacture other exotic materials off-Earth as well.

"If this works, it'll be huge," Made In Space business development engineer Brad Kohlenberg told Space.com last month at the Dent:Space conference in San Francisco. "It'll be the first time we've ever monetized physical goods in space, other than memorabilia and stuff like that."

The project is a collaboration with Thorlabs Inc., which makes ZBLAN and other materials here on Earth. If all goes according to plan, the machine will launch toward the ISS in the first quarter of 2017, Made In Space representatives said.

Made In Space's overarching vision involves helping to establish an off-Earth economy, which company representatives believe will enable humanity's spread out into the solar system.

The startup has already made some progress along these lines. For example, the ISS already houses two 3D printers built by Made In Space. The first machine is a technology demonstrator that arrived at the orbiting lab in September 2014; the second is a fully commercial facility that was installed in April of this year.

This latter machine, called the Additive Manufacturing Facility (AMF), is a "machine shop in space" that's available for use by customers here on Earth, Made In Space representatives have said.

The company is working on other projects to help open up the final frontier as well. For example, Made In Space — along with partners Northrop Grumman and Oceaneering Space Systems — recently scored a $20 million NASA grant to build a robotic-arm-equipped 3D printer capable of building and assembling a large-scale structure in space. This project, called Archinaut, is scheduled to get an orbital trial in 2018.

And in April 2016, a Made In Space idea to turn asteroids into autonomous spacecraft was funded by the NASA Innovative Advanced Concepts program, which seeks to encourage the development of potentially revolutionary space technologies.