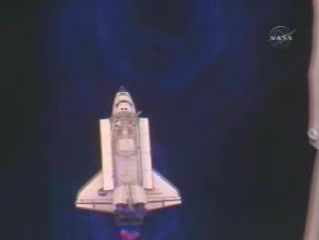 The space shuttle Endeavour appears in a camera view from the International Space Station (ISS) during undocking on Aug. 19, 2007.
(Image: © NASA TV.)

NASA decided to drop one backup site for Endeavour's planned Tuesday landing and keep its shuttle and space station Mission Control centers open through Monday here at the Johnson Space Center (JSC) based on the latest forecasts for Hurricane Dean.

"There is still uncertainty with a storm like this," John Shannon, chairman of Endeavour's STS-118 mission management team, told reporters in a Sunday briefing. "But right now, it's looking pretty good from our standpoint."

NASA scaled back a Saturday spacewalk outside the International Space Station (ISS) by Endeavour's astronauts and pushed their landing up one day earlier, to Tuesday at 12:32 p.m. EDT (1632 GMT), to avoid complications from Hurricane Dean during the shuttle's return to Earth.

Mission managers were concerned that the storm could prompt an evacuation of NASA's Houston-based Mission Control, forcing the agency to rely on a backup operations center for Endeavour's landing at the Kennedy Space Center in Cape Canaveral, Florida.

"The threat is certainly somewhat less than it was over the last two days," Shannon said.

By Sunday afternoon, forecasts for the hurricane's path put it well south of NASA's JSC during Endeavour's anticipating landing, with maximum winds blowing at 145 miles per hour (230 kph) as the storm made its way toward the southern Gulf Coast.

"It's an impressive storm to say the least," NASA astronaut Clayton Anderson said as he observed Dean from aboard the space station on Tuesday.

Based on the latest forecast, NASA will now aim to land Endeavour and its seven-astronaut crew at the Kennedy Space Center, with California's Edwards Air Force Base in the Mojave Desert serving as a backup runway. The shuttle has enough supplies to stay aloft until Friday, if required, NASA has said.

A third landing site, White Sands Space Harbor in New Mexico, will not be activated Tuesday since the hurricane threat to flight operations centers has eased slightly, Shannon said.

Meanwhile, Endeavour's STS-118 astronaut crew was set to end a busy day in orbit with some much deserved time off.

Commanded by veteran shuttle flyer Scott Kelly, Endeavour cast off from the ISS at 7:56 a.m. EDT (1156 GMT) Sunday after nine days docked at the orbital laboratory. Kelly and his crewmates hauled more than two tons of cargo to the station, replaced a broken U.S. gyroscope, installed a new starboard-side girder and staged four spacewalks to continue the orbital laboratory's assembly. The shuttle launched towards the space station on Aug. 8.

The shuttle's crew also includes teacher-turned-astronaut Barbara Morgan, a former Idaho schoolteacher who first joined NASA in 1985 as its backup to Teacher in Space Christa McAuliffe before the tragic Challenger accident a year later.

Morgan participated in a series of educational events during her STS-118 flight, though one final video downlink slated for today was canceled due to Endeavour's accelerated landing schedule.

Earlier today, Morgan helped crewmates scan Endeavour's wing edges and nose cap for any signs of damage by micrometeorites or orbital debris during its flight. The late inspection is a standard part of NASA shuttle flights since the 2003 Columbia accident and will help engineers ensure Endeavour is safe for landing.

Past inspections and in-depth analysis on Earth allowed NASA to clear a small gouge on Endeavour's underbelly, as well as a window scuff, of any concern late last week.

"As we speak, we've got almost all the data down," Matt Abbott, NASA's lead STS-118 shuttle flight director, said Sunday of the late inspection. "Our crew was phenomenal."