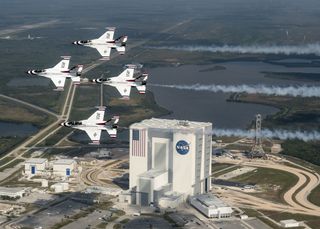 WASHINGTON — A military branch for space might indeed be necessary for the United States to maintain its superpower status in the final frontier. But the Pentagon and Congress should not rush to create a Space Forcewithout at least weighing the downsides, experts caution.

President Trump on June 18 ordered the Pentagon to form a sixth branch of the military dedicated to space, and Congress is poised to back that request with legislation that would be included in the 2020 defense policy bill.

The president thrust the Space Force into the limelight, but neither the administration nor Congress has clearly defined its mission, said Brian Weeden, program director at the Secure World Foundation. [Military Space - Spacecraft, Weapons and Tech]

Weeden spoke on Monday at The Brookings Institution in a panel discussion on the pros and cons of having a separate military service for space.

Former Secretary of the Air Force Deborah Lee James has been one of the harshest critics of Trump's proposal. The Space Force in her mind is the classic shiny object that distracts from the real debate. And Washington being Washington, "it is a virtual certainty that if a space force is legislated and goes through, it will consume a lot of time, a lot of effort and absolutely will be a distraction."

In the end, "it could end up being the best thing since sliced bread," said James. But it would come at a huge price because it will "slow down the momentum" in the Air Force to accelerate space investments and programs. "At this moment the focus is on getting things done," said James. "Suddenly the focus will shift on who is going to report to whom, and how do we get these directives written and everything that goes along with creating a brand new bureaucracy."

Air Force leaders "will work hard to make sure it's not a distraction but it will be, no matter how much they try to mitigate it," said James. "Eventually it'll settle out, but you will go through years of thrashing."

Analysts have estimated that forming a new military service could take two to five years. One thing to remember is that major government reorganizations never pan out as planned, noted Michael O'Hanlon, senior fellow at Brookings. He recalled that after 9/11, the George W. Bush administration established an office of the director of national intelligence to lead 16 intelligence agencies. "That change may finally have achieved net benefits, but it took a decade of disruption to get it right." Similarly, the creation of the Department of Homeland Security "required huge effort and produced much chaos," O'Hanlon said. "And it probably did not improve the performance of the agencies now under its umbrella."

Seemingly petty issues like the Space Force uniforms (the butt of many late night comedians' jokes) will be part of the process of standing up a new service and will add to the disruption, James said. "These are details people joke about. They may seem trivial but they are details that have to be worked out. These things take time and by nature will become a distraction," she said. "It would be a shame that something so important as a new military service focused on space would somehow be born out of ridicule."

The typical "bureaucratic minutiae" will command a lot of attention, said Weeden. Invariably, controversies over things like uniforms, logos and mission statements could drag out the process.

"At this moment I don't know what a space force is, it doesn't have a lot of definition to it," he said. With Russia and China developing more powerful anti-satellite weapons, the U.S. military has to beef up its space warfighting capabilities but a new service is probably not the answer. "I am skeptical," said Weeden. "Warfighting is not what an 'organize, train and equip' service does."

James agreed. "I'm in favor of that, that would be the ticket to solving the warfighting problem."

Until 2002, the U.S. military had a separate space command, which had comparable standing to the major combatant commands such as Central, Pacific and European commands, O'Hanlon explained. After 9/11, the Pentagon decided it needed a Northern Command to improve security within North America. At that point, Space Command was deemed unnecessary and its responsibilities were shifted under the broader Strategic Command.

James said that if the Space Force moves forward, it could comprise anywhere from 35,000 to 40,000 people who are now in the Air Force Space Command, the Army's space cadre and the intelligence community.

Deputy Defense Secretary Patrick Shanahan is due to submit a report to Congress on Wednesday outlining possible options. A Space Force conceivably could be modeled after the former U.S. Space Command or could be more joint, like U.S. Special Operations Command. Or it might be fashioned after the Marine Corps, a semi-autonomous service under the Department of the Navy.

"I think you're going to see all these things in this report," said James.

Regardless of what steps the Pentagon and Congress take next, leaders should make sure the Space Force does not become a divisive partisan issue, said Frank Rose, a Brookings fellow and former assistant secretary of state for arms control. "My concern is that the Space Force is identifiable with President Trump," he said. "After the November election there will be a 'reflexive anti-Trump sentiment.' … A partisan debate is not the right way to go. We need to have a serious debate."