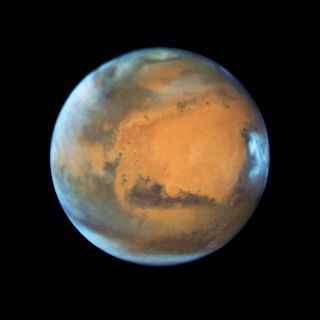 This weekend, Mars (shown here in a Hubble telescope image taken in 2016) will be in opposition, meaning it will be much closer to our planet than it usually is. But it's not going to be anywhere near close enough to Earth to appear as big as the moon, as a dumb viral hoax claims.
(Image: © NASA, ESA, the Hubble Heritage Team (STScI/AURA), J. Bell (ASU), and M. Wolff (Space Science Institute))

There's a party in Earth's shadow this weekend, and our cosmic neighbors are invited!

The guest list is a who's who of nearby heavenly bodies. The moon will be there, passing through the center of Earth's massive shadow for nearly 2 hours on Friday night (July 27), resulting in the longest total lunar eclipse of the century. (Unfortunately, North Americans will not be able to see this eclipse in person, but they can stream it.)

Then, there's the guest of honor: Mars. Thanks to a biennial alignment of Earth and Mars' orbits around the sun on July 31, the Red Planet will make its closest approach to Earth since 2003 (and it has generously agreed to bring some of that famous Martian water to the soiree). That means that for one glorious night, Mars will appear as large as the full moon in the night sky … right? [7 Most Mars-Like Places on the Planet]

To paraphrase an Apollo astronaut, "Houston, we have some nonsense."

A viral hoax article making that claim gets trotted out every few years, when Mars makes a close approach to Earth. But the idea that a rock 35.8 million miles (57.6 million kilometers) away will suddenly appear a thousand times larger in the night sky is total nonsense — and NASA wants to make sure you know that.

"Don't be fooled by the Mars Hoax," NASA scientists wrote in a recent blog post that someone at the agency felt duty-bound to publish. "The message is that Mars will look as big as the moon in our night sky. If that were true, we'd be in big trouble, given the gravitational pulls on Earth, Mars and our moon!"

We can speculate on the havoc that a moon-size Mars would cause for all parties involved: severely higher tides on Earth, a drastically warmed Martian climate and perhaps even the removal of both planets' moons from their orbits, to name a few. But it's probably more productive to say what will actually happen as Mars makes its closest approach to Earth in 15 years.

Here's what you need to know: Earth and Mars both travel around the sun on wobbly, elliptical orbits, so their relationship to each other in space always changes. Every few years, their orbits align.

When this happens, Mars is said to be at opposition, because the Red Planet and the sun are situated on opposite sides of Earth. For Earthlings, that means that when the sun sets in the west at night, Mars appears to rise in the east. Over the coming nights, Mars will indeed glow brighter and brighter in the evening sky as the planet makes its closest approach to Earth on July 31, finally coming within a mere 35.8 million miles (57.6 million km) from our planet before moving away again.

So, what will this cosmic occurrence actually look like? Mars will still appear to the naked eye as a little red sparkle in the sky, but it will be about 10 times brighter than it was a few months ago (still not as bright as Venus, though). With a good telescope, you may be able to make out some of the Red Planet's finer details, including its polar caps, but it will still not look as clear as the moon, NASA said.

For space fans, this all makes for an awesome weekend. But what does Mars' close approach mean for you, personally? Some astrologers warn that the sun and Mars' opposing positions on the zodiac wheel could lead to a swell of "sexual tension and magnetism" this weekend. Because astrology is not an evidence-based science, we cannot speak to the truth of that prediction, but here's one bit of scientific advice: If you meet someone this weekend who tells you that Mars is going to appear as large as the moon in the night sky, don't sleep with them.