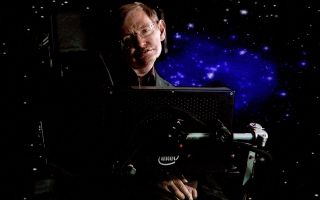 Future people who missed Stephen Hawking's 2009 time-traveler party will have a second chance to pay their respects to the physicist.
(Image: © Frederick M. Brown/Getty)

Physicist Stephen Hawking, who died March 14 at age 76, will be remembered primarily for his pioneering work in studying black holes and describing the origin of the universe. But he should also be remembered for hosting one of the most pitiful parties of all time.

On June 28, 2009, Hawking threw a party for time travelers. The next day, he sent out the invitations. "Copies of it will survive in one form or another for many thousands of years," Hawking later said in the documentary "Into the Universe with Stephen Hawking."

"Maybe one day, someone living in the future will find the information and use a wormhole time machine to come back to my party, proving that time travel will, one day, be possible," he said.

Nobody attended Hawking's party. But perhaps some curious future humans will ride the wormhole to Hawking's interment service, which will be held at Westminster Abbey in London on June 15. According to The Stephen Hawking Foundation, time travelers are cordially invited to that ceremony, too.

London travel blogger IanVisits first noticed the inclusive invitation when he was applying for one of the 1,000 available memorial tickets being raffled off on the foundation's website. (You can apply for one here. In the drop-down menu where applicants enter their age, Ian noticed that there were options for applicants born between 2019 and 2038. In other words, people who are not yet born — even those who will not be born for another 20 years — are welcome to enter the ticket raffle.

When reached for clarification, The Stephen Hawking Foundation acknowledged its time-traveler-inclusive policy. "We cannot exclude the possibility of time travel, as it has not been disproven to our satisfaction," a representative told the BBC. "All things are possible until proven otherwise."

While the Foundation indicated that no time travelers have submitted an application for tickets yet, there is still some time; the ballot closes at midnight tomorrow (May 15).

"So far, we have had applications from all round the world," the foundation spokesperson said. "And we do mean round — there are no flat-Earthers here."

Hawking's ashes will be interred at Westminster Abbey during the June 15 ceremony with friends, family, colleagues and schoolchildren in attendance. His ashes will reside between the tombs of Sir Isaac Newton and Charles Darwin, where the public may come to pay their respects shortly after the memorial concludes.