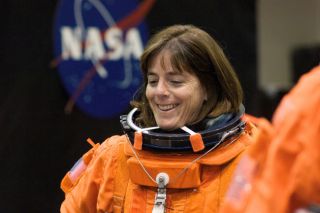 HOUSTON --After more than two decades of waiting, NASA?s first official educatorastronaut is ready to fly.

BarbaraMorgan, who first joined NASA?s spaceflyer ranks 22 years ago during theagency?s Teacher in Space program, is due to launch Aug. 7 with six STS-118crewmates aboard the shuttle Endeavour on a construction mission to theInternational Space Station (ISS).

?We?re verythrilled that we have a mission specialist who is an experienced educator,?said Joyce Winterton, NASA?s associate administrator for the Office ofEducation, during a briefing today here at the agency?s Johnson Space Center(JSC). ?Her mission will be an opportunity to engage many educators in theirprofessions and their development, as well as students to understand what itrequires to be an astronaut.?

NASA first selectedMorgan in 1985, when the agency announced she would serve as the backupspaceflyer to fellow schoolteacher Christa McAuliffe as part of the agency?sTeacher in Space program. McAuliffe and her six shuttle crewmates weretragically killed during the 1986Challenger accident, after which Morgan performed various activities andtasks in McAuliffe?s stead as her Teacher in Space Designee before returning toteach elementary school in McCall, Idaho.

?Christawas, is, and always will be our ?Teacher in Space,? our first teacher to fly,?Morgan said in a NASA interview, adding that showing schoolchildren how adultsrecover from tragedies such as the Challenger and Columbia accidents has kept hercommitted to human spaceflight.

Morganreturned to NASA in 1998, this time as a full-fledged educator astronaut andwas assigned to Endeavour?s STS-118 mission in 2002.

?The?Educator Astronaut? and the ?Teacher in Space? are both teachers,? Morgan saidin a NASA interview. ?They experience space, and then they share thatexperience through a teacher?s perspective and through the eyes, ears, thehearts and minds of teachers.?

A new powertransfer system aboard Endeavour, which is designed to allow the orbiter todraw on the space station?s power grid, could extend the STS-118 mission bythree days, add an extra spacewalk and extend Morgan?s teaching opportunities, theyadded.

Unlike McAuliffe?splanned flight aboard Challenger, which was completely dedicated to education projectsand highlighted by two lessons to be broadcast on television, Morgan?s missionis split between her duties as educator and mission specialist.

All told, undersix hours will be reserved solely for education during STS-118, said CindyMcArthur, head of NASA?s Teaching in Space project at JSC. While splittingMorgan?s attention takes time away from education efforts, it also adds to hercomplete astronaut experience, which should help her better relate the missionto students and teachers on Earth, McArthur added.

Morgan willparticipate in at least one interactive video broadcast with students on Earthduring the mission and record a series of video ?teachable moments? while inorbit, McArthur said. If the mission is extended to 14 days, two additionalvideo broadcasts are planned, she added.

Morgan andher crewmates will also transfer a set of plant growth chambers, as well asbasil and lettuce seeds, to the ISS for Expedition 15 astronaut ClaytonAnderson to cultivate over 20 days as part of a NASA Engineering DesignChallenge. She is flying some10 million basil seeds that will later be distributed to students acrossthe U.S. to grow in their own home-built growth chambers.

?But theon-orbit activities are only one component in a comprehensive education plan,?McArthur said.

NASA willparlay Morgan?s flight to support an Engineering Design Challenge during the2007-2008 school year in an effort to challenge students to build their own plantgrowth chambers for lunar missions. The space agency is also planning a FitExplorer program to emphasize the importance of physical fitness for studentsand astronauts in space.

A national pennant designchallenge called on students to design their own banner for the STS-118 mission,with online voters choosing the top entry to fly aboard Endeavour during nextmonth?s mission.

WhileMorgan is NASA?s first to launch under the title educator astronaut, she is notthe only professional teacher to join the agency?s spaceflyer ranks.

Educatorastronauts Dottie Metcalf-Lindenburger, Richard Arnold and Joseph Acaba, alltrained schoolteachers selected in 2004, have completed their astronauttraining and are currently awaiting their own spaceflight assignments.

?They?reall of course completely trained and ready for a spaceflight whenever they'reassigned,? McArthur said. ?Our hope is certainly that, before the end of theshuttle flights and certainly then on the next generation of vehicles, thatwe?ll continue to have educator astronauts fly.?