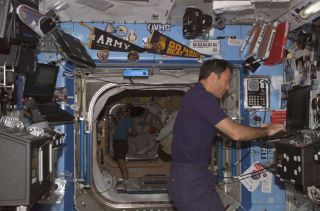 Pennants, perhaps like the Army and Navy examples seen here aboard the International Space Station, will be designed by six to 12 year old students competing to have their creation flown on space shuttle Endeavour this summer.
(Image: © NASA.)

Adorningthe entranceway to the U.S.Destiny Laboratory in the International SpaceStation are two pennants: one for the Army and one that reads "GoNavy, Beat Army."

They arenot the first pennants to fly in space: hundreds of flags and banners championingcolleges, societies and even sports teams have been carried to orbit by the space shuttle. Now, NASA wants a pennant of its own and isturning to grade school students to design it [image].

Inpartnership with Mad Science and AOL's Kids Service KOL, NASA is hosting acontest for 6- to 12-year-olds to create pennants that celebrate either of twothemes: the upcoming STS-118shuttle mission including the flight of the firsteducator astronaut Barbara Morgan or the Vision forSpace Exploration, NASA's plans to send humans to the Moon, Marsand beyond.

The winningdesign will fly with Morgan on-board shuttleEndeavour when she launches this summer. The winner will be awarded a tripto the STS-118 launch with his/her parent or guardian, while runner-ups willreceive a signed picture of the STS-118 shuttle crew and an online NASA game willuse their pennant design.

A SpaceDay, featuring a NASA speaker, will be held at the finalists' schools, whichwill also receive educational resources, including seeds that haveflown in space. All student designers will receive certificates ofparticipation.

Accordingto NASA, students need more than a creative design for their pennants. Theymust research their topic, apply what they learn, and write an explanation oftheir design and how the pennant incorporates their knowledge about STS-118 orthe Vision for Space Exploration.

Entries maybe submitted online or through the mail but must be received by Tuesday, April10. Ten semifinalists will be chosen in three age groups: 6-8, 9-10 and 11-12.Judges from NASA, KOL and Mad Science will then select two finalists from eachgroup. On May 3, those six finalists will be announced, and one overall winnerwill be selected through online voting.

Spaceshuttle Endeavour's STS-118 missionis the 22nd shuttle flight to the International Space Station. It will continuespace station construction by delivering a third starboard truss segment.Currently targeted for July, the mission's crew includes Barbara Morgan, theformer back up to Teacher-in-Space Christa McAuliffe and the first educatormission specialist.

Announced byPresident Bush on January 14, 2004, the Vision for Space Explorationdirects NASA to complete assembly of the International Space Station and thento refocus on sending astronauts beyond low Earth orbit to the Moon andeventually to Mars. To accomplish this, a new crew explorationvehicle, Orion is planned to replace the space shuttle after its retirementin 2010.

For moredetails about NASA's pennant design challenge visit the website for AOL'sKOL Expeditions.