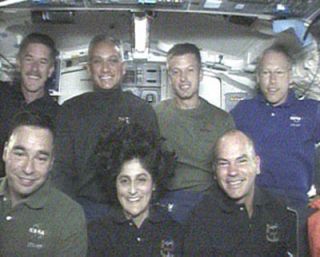 CAPECANAVERAL, Fla. -- The seven-astronaut crew of NASA?s shuttle Atlantis ishoping to beat the weather to make a Florida landing today after a successfulconstruction flight to the International Space Station (ISS).

Afternoonthunderstorms around NASA?s Shuttle Landing Facility here at KSC, as well asthick clouds, mayprevent Atlantis from landing during either of two windows today. But theturbulent weather is typical for the shuttle landing site this time of year,NASA has said.

?No landingis easy with weather, and we?re used to it,? said Norm Knight, NASA?s leadentry flight director. ?I?m always optimistic about it.?

Sturckowand his crewmates are completing a 13-day mission to the ISS, where theastronauts installed a pair new starboardsolar arrays and trusses, stow an older solar wing and swap out one memberof the outpost?s three-person Expedition 15 crew. They also helped the station?screw endure, and ultimately win over, a majorcomputer meltdown before swapping out one of the orbital laboratory?s astronauts.

TheAtlantis crew undocked from the space station on Tuesday and has twoopportunities to return to Earth today. In addition to a 1:55 p.m. EDTtouchdown, the shuttle could fire its engines a bit later for a 3:30 p.m. EDT(1930 GMT) landing before standing down for the day, Knight said.

Additionallanding opportunities arise at KSC, as well as at NASA?s backup runway at EdwardsAir Force Base in California, on both Friday and Saturday. The shuttle doeshave enough supplies to stay in orbit until Sunday, but mission managers want tokeep that final day in reserve to handle any unforeseen technical glitches.

The astronautsstaged four spacewalks - one more than planned - while at the ISS to install a$367.3 million pair of new starboard solar wings and the 17.5-ton Starboard3/Starboard 4 (S3/S4) truss segments that lend the station its new balancedlook. ?

?It?sreally one of those things that you?ll remember forever,? Reilly said ofworking on the ISS during two spacewalks.

The newsolar arrays will prime the station for the arrival of new modules and internationallaboratorys later this year.

Williams isreturning to Earth after a six-month mission to the ISS and joined the shuttlecrew in mid-flight as part of the NASA astronaut swap for the station?sExpedition 15 crew. Fellow U.S. astronaut Clayton Anderson, who launchedwith the STS-117 crew on June 8, took up Williams? post.

?I just can?twait to get back, to feel the air on my face and feel the sea breeze,? Williamstold reporters Wednesday, adding that she is looking forward to seeing herfamily, husband and beloved dog Gorby, whom she frequently mentioned during herspaceflight.

Today marksWilliams? 193rd day in space, a worldrecord for a female astronaut, though she has expressed some uncertainty athow she will cope after more months of life in weightlessness. She will return toEarth in a reclined position using a recumbent seat to ease the transition.

?I?m alittle bit nervous about that,? Williams said, adding that she?s tried to keepup a rigorous exercise regime. ?I?ve never done this before so I don?t know howeverything is going to work out.?

Meanhile,flight controllers on Earth said they were looking forward to today?s landingattempt despite the dire weather forecasts.