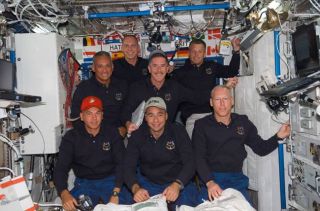 HOUSTON -- Astronauts aboard NASA?s shuttle Atlantis and the International Space Station (ISS) said Tuesday that their joint mission is going well, despite a busy pace and a few minor glitches.

?We couldn?t be happier with the mission so far,? veteran spaceflyer Rick Sturckow, commander of Atlantis? STS-117 mission to the ISS, told CBS News during a series of interviews on NASA TV. ?It?s going really great.?

Since their arrival at the ISS Sunday, Sturckow and his six STS-117 crewmates have swapped out one astronaut on the station?s Expedition 15 crew, installed a 17.5-ton addition to the orbital laboratory?s starboard framework and, on Tuesday, unfurled a new pair of new solar arrays.

?That put a pretty good chunk of our mission behind us,? Sturckow told CBS.

Aboard the ISS and Atlantis, the astronauts have worked through a false fire alarm, attitude control issues stemming from a Russian computer system glitch, and will later repair a torn heat shield blanket on the orbiter. But the issues have not kept the STS-117 astronauts from continuing their mission to deliver new starboard solar arrays and trusses to the ISS.

?When we first saw it, I don?t think we were too concerned and we?re still not,? Struckow told KTSM TV in El Paso, Texas of Atlantis? damaged thermal blanket and added that the planned repair is worth it. ?The shuttle?s an expensive piece of gear and it?s right to protect it.?

Today, STS-117 mission specialists Steven Swanson and Patrick Forrester are due to stage the second of four planned spacewalks to outfit the station with the new trusses and solar wings.

Astronaut Clayton Anderson, who launched towards the ISS aboard Atlantis to join the station?s Expedition 15 crew, said he was awed by the station as he learns the ropes from fellow spaceflyer Sunita Williams.

?Just looking out the window at the station, with Sun shining off the arrays and seeing all the vistas that we can see, it?s just incredible for me,? said Anderson, adding that Williams has been offering him sage advice about life aboard the ISS. ?She?s been trying to teach me all the tricks of the trade and where all the cubby holes on the station are, so it?s fun.?

Anderson is replacing Williams as an Expedition 15 flight engineer. Williams, who has lived aboard the ISS since December 2006, will return to Earth aboard Atlantis.

Atlantis mission specialist Danny Olivas, who is making the first spaceflight and spacewalks of his astronaut career during the STS-117 mission, said the shuttle?s June 8 launch into space outclassed any amusement park ride on Earth.

?It?s really a tremendous feeling. A lot of shaking, a lot of vibration, it was just really awesome,? Olivas told television reporters from his hometown of El Paso, Texas, adding that the liftoff and his first spacewalk on Monday made some deep personal impressions. ?I think I?ve burned some very memorable memories into my brain. I?m not going to lose those for some time.?