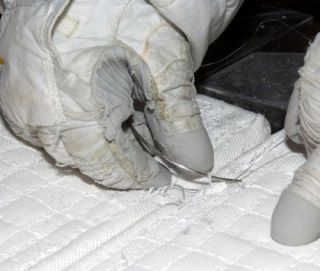 An astronaut demonstrates the use of a spacesuit 'darning' needle and stainless steel wire to sew together shuttle thermal blanket material as a possible repair method of the damaged blanket on NASA's shuttle Atlantis.
(Image: © NASA/collectSPACE.com.)

HOUSTON -- NASAengineers are conducting a series of tests to determine how best to repair atorn heat-resistant blanket on the space shuttle Atlantis.

JohnShannon, NASA?s deputy shuttle program manager, said astronauts and engineerson Earth are testing repair options that range from using a medical stapler to whatamounts to a spacesuit darning needle to securethe blanket swatch, which ripped free of its mount at the aft end ofAtlantis during the orbiter?s June 8 launch.

?They haveseveral different solutions to put the blanket down and keep it down,? Shannontold reporters here at NASA?s Johnson Space Center during a mission briefing.

Wire tiesand tools to pin the 4-inch by 6-inch (10-centimeter by 15-centimeter) triangularblanket flap into heat-resistant tiles nearby its location on Atlantis?left Orbital Maneuvering System (OMS) pod are also among the options, saidShannon. Duct tape, it turns out, won?t work in the vacuum of space, he added.

The frontrunner is the spacesuitneedle using a stainless steel wire as thread. But a final decision is expectedsometime in the next two days, during which time mission managers will also decidewhether to perform the repair during the third STS-117 spacewalk set for Fridayor wait until the newlyadded fourth excursion on Sunday, Shannon said.

While not athreat to the safe return of Atlantis? STS-117 astronaut crew, there is a riskthat heat of reentering the Earth?s atmosphere could damage honeycomb-likegraphite-epoxy material beneath the torn blanket and require a repair afterlanding that could be avoided, mission managers have said.

Later thisweek, NASA engineers will conduct a series of wind tunnel tests and heatingstudies on mockups of the damaged blanket to evaluate the repair techniques.

Shuttleengineers continue to study a few minor items associated with the rest ofAtlantis? heat shield, including a wing sensor reading suggesting the orbiter?sright wing leading edge may have been hit by a piece of orbital debris, Shannonsaid.

The sensor isone of 88 accelerometer and temperature detectors that sit behind theheat-resistant reinforced carbon carbon (RCC) panels along each of Atlantis?wings. But other nearby sensors did not register similar indications as theoriginal, which would occur in the event of an actual strike, Shannon said.

?What wehave seen does not indicate that we have been hit by anything,? he added. ?Ithink characterizing this as an impact would be premature at this point.?

Similarsensor returns were seen duringNASA?s last shuttle flight and were found to be a false report, Shannonadded.

However, Atlantis?STS-117 astronauts are already scheduled to perform a second inspection of theorbiter?s heat shield later in their mission, so the area is already one thatwill be surveyed again.

Known as alate inspection, the scan is a duplicate of the survey performed by the shuttlecrew just after launch and is designed to search for any signs of damage from micrometeoritesand orbital debris.

The newinspections and shuttle wing sensors were put in place following the 2003 lossof Columbia and its astronaut crew after the orbiter suffered heat shielddamage during launch.