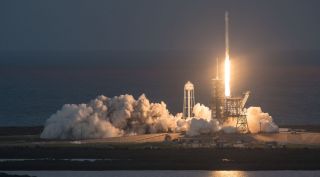 A SpaceX Falcon 9 lifts off Oct. 11 carrying the SES-11/EchoStar-105 satellite. The launch was the third mission with a previously-flow first stage.
(Image: © SpaceX)

WALLOPS ISLAND, Va. — NASA may decide to allow SpaceX to use a previously-flown Falcon 9 first stage on the next Dragon mission to the International Space Station, the latest sign that SpaceX's reusability efforts are winning broader acceptance in the market.

During a press conference at NASA's Wallops Flight Facility here Nov. 10 about the launch of a Cygnus cargo mission to the ISS, a NASA manager said the agency would likely approve the use of a reused booster on that mission, designated SpX-13, assuming it clears an upcoming review.

"We're in the final stages of doing all those assessments," Dan Hartman, ISS deputy program manager, said. SpaceX first requested to use a previously-flown booster for a cargo mission about a year ago. "On the NASA side, we've had a lot of major reviews."

He said SpaceX itself had one more readiness review for the booster they're planning to refly before deciding if they can use it for the SpX-13 mission, scheduled for launch Dec. 4. "If that comes back positive," he said, "I'd say the chances are that we'll be flying a reuse on SpX-13."

NASA had previously allowed SpaceX to reuse the Dragon capsules on cargo flights. On that SpX-11 mission to the ISS, launched in June, SpaceX used a Dragon capsule that first flew on the SpX-4 mission in 2014. The upcoming SpX-13 mission will fly a reused Dragon capsule as well, in this case one from the SpX-6 mission from 2015.

The upcoming launch is also intended to be the return to service of Space Launch Complex (SLC) 40 at Cape Canaveral Air Force Station in Florida. That pad was damaged in the September 2016 explosion of a Falcon 9 during preparations for a static-fire test. SpaceX shifted Falcon 9 launches to Launch Complex 39A at neighboring Kennedy Space Center, but wants to move those launches back to SLC-40 to prepare the pad for the first flight of the Falcon Heavy, scheduled for no earlier than late December.

A decision by NASA to use a previously-flown Falcon 9 first stage would suggest increasing acceptance of reusability by the market. SpaceX has flown three Falcon 9 missions to date with reused boosters, all for commercial customers: SES 10 in March, BulgariaSat-1 in June and SES 11/EchoStar 105 in October. The company has successfully landed first stages on 19 launches, including the three missions with reused boosters.

Other customers are either signing contracts specifying the use of reused boosters or allowing their use under existing contracts. Iridium announced Oct. 19 that its next two launches of Iridium Next satellites will use previously-flown boosters. The company originally planned to use new boosters for all its launches, but chief executive Matt Desch said earlier this year he would be open to using previously-flown boosters if it could accelerate its schedule.

A day earlier, Israeli operator Spacecom, whose Amos-6 satellite was lost in the September 2016 Falcon 9 explosion, announced a contract for launching the Amos-17 satellite on a Falcon 9 in 2019, with an option for using a previously-flown booster .

One of the last to accept reused boosters may be the U.S. Air Force, which has yet to develop a process by which the stages can be recertified for use launching national security payloads. However, the general in charge of Air Force Space Command said he expected that, one day, it would make use of previously-flown boosters.

"The market's going to go that way. We'd be dumb not to," Gen. Jay Raymond said in an Oct. 16 interview with Bloomberg. "What we have to do is make sure we do it smartly."