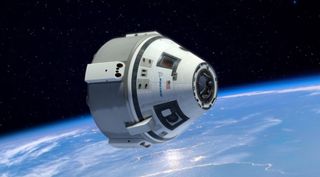 Boeing now plans an uncrewed CST-100 test flight in the third quarter of 2018, with a crewed flight in the fourth quarter or, possibly, early 2019.
(Image: © Boeing)

ADELAIDE, Australia — Boeing says it is making good progress on the development of its CST-100 Starliner commercial crew vehicle, but acknowledged the first crewed test flight of the spacecraft might not take place until early 2019 .

During a panel discussion at the 68th International Astronautical Congress here Sept. 26, Chris Ferguson, director of Starliner crew and mission systems at Boeing, said the company was in the middle of a wide-ranging development program with development of flight hardware and testing of many different vehicle systems.

In an interview at the conference, Ferguson said that the company's current schedule calls for a pad abort test at White Sands Missile Range in New Mexico in the second quarter of 2018. That would be followed by an uncrewed orbital test flight of the vehicle, launched on an Atlas V, in the third quarter of 2018.

"If the results of that are very favorable," he said of the uncrewed flight test, "our crewed flight test is fourth quarter — perhaps, depending on the outcome, maybe the first quarter of the following year."

He didn't identify any particular system with the vehicle that was on the critical path to those test flights. "We'll fly when we're ready," he said. "There's a lot of pieces that have to come together to enable us to do that."

Ferguson said that the company plans to work with NASA to select a crew for that crewed test flight about a year before its launch, or "L-12 months," but wants a greater degree of confidence in the schedule before doing so.

"Every day we're met with new challenges. We'll do our best to stick with that L-12 month target. Obviously, since it's based on a launch date, we'll have to flex accordingly," he said. "If we maintain our fourth quarter target for next year, you could probably see a crew announcement some time in the latter part of this year."

Once the Starliner completes the flight test program and is certified by NASA, Boeing has a contract for six flights to transport NASA astronauts to and from the International Space Station. Ferguson said the company is also marketing the vehicle for potential non-NASA customers.

"We are looking for participants in the form of countries, industries and individuals that want to participate in this great business of human spaceflight," he said, noting that NASA remained the "flagship" customer for Starliner.

Asked if Boeing was actively marketing Starliner to commercial customers, he referred to a spacecraft docking simulator the company has on display in the conference exhibit hall. "I don't think we would bring this here if we weren't out trying to engage potential customers," he said.

Ferguson said that, after several years of development, he was feeling increasingly optimistic that Starliner would soon fly.

"After six years of my involvement, and several more years before

that, it finally looks like it's beginning to come together. I've got a very good feeling about our ability to get launched next year."