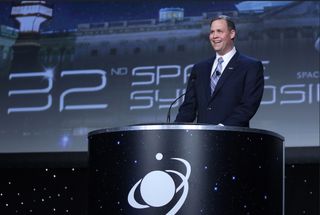 WASHINGTON — The nominee to be the next administrator of NASA says that he believes the agency's top challenges include maintaining "consistency and constancy of purpose" that can support long-term plans, while building up international and commercial relationships.

Those opinions were expressed by Rep. Jim Bridenstine (R-Okla.), formally nominated Sept. 5 to be NASA administrator, in a questionnaire he submitted to the Senate Commerce Committee. That 32-page document, signed Sept. 11, was recently posted by the committee on its website in advance of a confirmation hearing expected as soon as next week.

Among the questions posed by the committee to Bridenstine was, "What do you believe to be the top three challenges facing the department/agency, and why?"

"Maintaining consistency and constancy of purpose while establishing a consensus agenda that can bridge multiple administrations regardless of party," he responded in the first of three bullet points. "This is essential to avoid resource-wasting program cancellations and maintain high morale both within the Agency and its contractor workforce." [In Photos: President Donald Trump and NASA]

A second bullet point mentioned both building up and maintaining international partnerships "while ending dependency on unfriendly nations to avoid exploitable vulnerabilities." Bridenstine did not elaborate, but that could include continued reliance on Russia for transporting astronauts to and from the International Space Station.

A third bullet point emphasized the need to bring together "traditional space companies and new space entrepreneurs into a comprehensive NASA vision to maximize resources and create efficiencies."

Bridenstine also used the questionnaire to explain his qualifications for the job, citing his experience as a member of Congress active on space issues as well as past work, including a stint as executive director of the Tulsa Air and Space Museum and Planetarium, as well as a U.S. Navy pilot.

In a resume submitted with the questionnaire, Bridenstine took credit for several provisions in the latest NASA authorization bill, signed into law in March, including a "review of concepts and technologies for removing orbital debris" and a requirement that NASA "develop a post-ISS plan to avoid a gap in low Earth orbit platforms."

"NASA is an incredible leadership and soft power tool for the United States of America," he wrote in the questionnaire. "With NASA's global leadership, we will pioneer the solar system, sending humans back to the Moon, to Mars, and beyond. This requires a consistent, sustainable strategy for deep space exploration."

Bridenstine's comments also appeared to address criticism that he is opposed to Earth science research, based on a speech he made on the House floor in 2013 where he questioned whether global warming was real.

He cited as an example changes in the climate of Mars, which early in its history had a much thicker atmosphere that enabled warmer, wetter conditions. "At some point, Mars changed dramatically and we should strive to understand why," he wrote, although there is little connection between the loss of the Martian atmosphere and temperature changes in the Earth's atmosphere. "Studying other planets can inform our understanding of Earth."

Much of the questionnaire covered basic issues, including listing past jobs, political donations and awards. It also addressed one brush with an ethics violation Bridenstine had early in his congressional career, when he and other members of a congressional delegation to Azerbaijan in 2013 had their travel paid by "entities ineligible to sponsor such travel."

The questionnaire are Bridenstine's most detailed comments since being nominated early this month for the position. Bridenstine has not talked publicly since the nomination was announced, and issued just a three-sentence statement Sept. 6 saying he was "humbled" by the nomination and that he "will work with all diligence to achieve the President's vision for America's leadership in space" if confirmed by the Senate.

Despite some outside criticism, in large part because of his past floor speech on climate change, Bridenstine has strong support from within the space community.

"Everybody that's interacted with him say he's level-headed, pragmatic, thoughtful, has given a lot of attention to what's needed for a good future space program," said John Logsdon, founding director and professor emeritus of the Space Policy Institute at George Washington University, during a Sept. 12 panel discussion held by Politico.

"I think he is a perfectly reasonable choice," he added. "The fact he's a 'politician' I think is irrelevant. The criticism comes from politicians." That statement referred to questions raised by Florida's two senators, Bill Nelson and Marco Rubio, immediately after the nomination was announced.

Later in the same event, Walter Scott, founder and chief technology officer of DigitalGlobe, also praised Bridenstine's nomination. "We're very pleased to see somebody as forward-leaning as Congressman Bridenstine taking on that role," he said.

Gold described an initial meeting with Bridenstine, shortly after Bridenstine was elected to Congress, that lasted far longer than Gold expected. "He was so excited," he recalled.

Gold also addressed the criticism of Bridentsine. "As I read some of the material that's been coming out in the media, I don't recognize the man that's being described," he said, insisting that Bridenstine was a strong supporter of Earth science because of its relevance to weather forecasting. "If you care about Earth science, that's a reason to vote for Jim Bridenstine, not against him."

Bridenstine's support for weather research was confirmed by Antonio Busalacchi, president of the University Corporation for Atmospheric Research. "In the two times I testified before his congressional committees, it became quite apparent to me that Rep. Bridenstine is a true champion for the weather community," he said in a Sept. 6 statement. "We appreciate his deep understanding of the importance of improved weather prediction for the U.S. economy and national security, as well as for protecting lives and property."

He stopped short, though, of a total endorsement of Bridenstine's nomination. "As someone who worked for NASA for 18 years, I look forward to Rep. Bridenstine's confirmation hearings and learning about his plans for the agency, including his support of Earth observations and research that are so essential for understanding our planet's weather and climate."