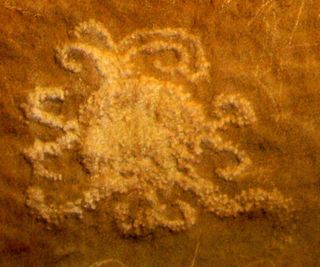 Millions of people will gaze at the Great American Eclipse on Aug. 21, shooting photographs and taking selfies. A thousand years ago, early Pueblo people, called Chacoans, captured their experiences of a total solar eclipse by carving it into a rock — a circle with looping streamers that resemble the sun's outer atmosphere, or corona.

Not only does this rock art, or petroglyph, depict a solar eclipse with a gigantic eruption of plasma called a coronal mass ejection (CME), its looping lines may have evoked a wondrous, inspirational experience, said solar astronomer J. McKim Malville, a University of Colorado Boulder professor emeritus, who is an expert in archaeoastronomy.

"The petroglyph looks more celebratory than frightening," Malville told Live Science. "If our interpretation is correct, they tried to depict the extraordinary sight of the corona, like nothing seen before — associated [it] with a deity that was even more mysterious and powerful than they imagined." [See Photos of the Petroglyph of the Solar Eclipse]

Malville discovered the petroglyph in 1992, while on a scientific excursion into Chaco Canyon, New Mexico, with W. James Judge, then a professor of anthropology at Fort Lewis College in Colorado. They found the petroglyph among others pecked into a large boulder called Piedra del Sol, near the ruins of a cultural hub for the Chacoans, who thrived there between A.D. 900 and 1150.

When he saw it, Malville immediately recognized something familiar.

"Some people might see it as a bug or a tick or a spider," he said. "But it struck me as very similar to photographs of coronal mass ejections that I'd seen, and drawings."

In 2014, Malville and professor José Vaquero of the University of Extremadura in Cáceres, Spain, published a study in the Journal of Mediterranean Archaeology and Archaeometry describing the discovery. They knew that an eclipse had occurred in the region on July 11, 1097, and that the sun's corona and even CMEs are visible to the naked eye during totality (when the moon's shadow completely blocks the sun's light from reaching Earth). But they needed evidence that the sun was in a period of heightened activity, known as solar maximum, when such ejections are most common. It occurs about every 11 years or so, with some variation in the intensity, Malville said.

He and his colleague consulted several sources to determine the level of activity around the time of the eclipse. They looked at data from ancient tree rings, which store traces of atmospheric carbon from photosynthesis and also provide a natural calendar of annual growth. During periods of high solar activity, the sun's more intense magnetic fields deflect cosmic rays from reaching Earth, reducing the amount of radioactive carbon, found as isotope carbon-14, in tree rings. For the period around 1097, the carbon-14 isotopes were low.

Naked-eye observations of sunspots recorded in ancient Chinese texts also indicated higher solar activity, as did historical data from northern Europeans on the annual number of so-called "auroral nights." The evidence pointed to high levels of activity on the sun during the 1097 eclipse. [The 8 Most Famous Solar Eclipses in History]

"It turns out, the sun was in a period of very high solar activity at that time, consistent with an active corona and CMEs," Malville said in news statement.

The depiction itself, a circle with looping streamers radiating from the edge, struck Malville as something jubilant, not frightening.

There are cultures that consider eclipses as dangerous and fearsome omens during the moments when the day turns into "night," Malville said.

He recalled viewing the June 30, 1972, eclipse in Kenya, camped at the eastern edge of Lake Turkana among Turkana, Samburu and El Molo tribes. During the eclipse, the El Molo went into their huts, as they do every evening, remaining there until light returned; they didn't seem influenced at all by the event, he said. But the other tribes came to the campsite to view the eclipse.

This particular event lasted 7 minutes, an unusually long time, and the people there had a chance to see the beauty of the corona during totality.

Afterward, the people performed dances to celebrate the eclipse and thank the astronomers for the chance to see it.

Malville thinks that the 1097 eclipse in Chaco Canyon may have stirred a similar sense of wonder in the early Pueblo people. After 1100, the people built 10 large houses, called the Great Houses in Chaco, all of which are in areas that provide dramatic views of the rising or setting sun at the winter or summer solstices, he said.

"There is the possibility that the glory of that experience for the people living in Chaco in 1097 was transformed to an increased reverence for or an increased appreciation of the sun," Malville said.

He has a theory about why some modern people might claim that ancient civilizations were terrified by eclipses.

"They have never seen the full glory of an eclipse themselves," he said.