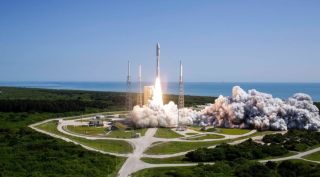 Launch of an Atlas 5 551 rocket, the same version that will be used by United Launch Alliance for the STP-3 mission.
(Image: © ULA)

The $191.1 million contract is for the Space Test Program (STP) 3 mission, set to lift off from Cape Canaveral Air Force Station, Florida, in June 2019 aboard an Atlas 5 rocket in the 551 configuration. The service said that $184.9 million is being awarded at the time of the contract using fiscal year 2017 space procurement funding.

The Air Force put the STP-3 launch up for bid in September 2016, giving SpaceX and ULA until December to submit proposals. It's just the third competitively-bid national security space launch contract after an era where ULA — a joint venture between defense industry giants Boeing and Lockheed Martin — was the government's sole source for launches.

The effort is part of the Air Force's "Phase 1A," an effort to "reintroduce a competitive procurement environment" into the Evolved Expendable Launch Vehicle (EELV) program, the service said. This particular phase is set to cover 15 competitively-bid launches through 2019, at which point the military hopes to have several launch providers as options.

SpaceX won the first two launch contracts, including a GPS 3 launch that was awarded in March. While other companies are developing their own launch systems, currently SpaceX and ULA are the only two companies certified for EELV-class launches.

The payload for STP-3 will be the STPSat-6 vehicle with the National Nuclear Security Administration's Space and Atmospheric Burst Reporting System-3, an experimental blast detection system. It will also carry NASA's Laser Communications Relay Demonstration payload and six secondary payloads the Air Force said would be announced no later than a year prior to launch.

"We are honored that the Air Force has entrusted ULA with launching this important test mission," ULA president and CEO Tory Bruno said in a statement. "With a mission success record of 100 percent and a tremendous heritage of 71 consecutive successful Atlas V launches, we provide the best overall launch service for our customers. ULA is the choice for customers when a critical payload must be delivered to space on-time and safely."

John Taylor, a spokesman for SpaceX, said in a statement that "the mission performance required that we bid Falcon Heavy," a rocket that is still in the process of receiving final certification from the government for military launches.

"We did submit a bid, but with the knowledge that our first Falcon Heavy flight might occur after the time of the award," Taylor said. "Given we have not flown Falcon Heavy, we did not anticipate winning this mission."

SMC Launch Enterprise Director Claire Leon told reporters Friday that the price for the launch was lower than in the sole-sourced era, and that she believed the competition between ULA and SpaceX had gotten taxpayers a better price.