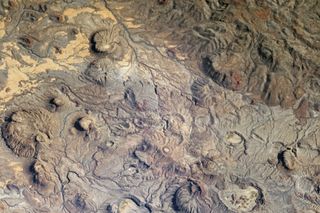 An astronaut onboard the International Space Station captured this image of the central Meidob Volcanic Field in western Sudan on Jan. 1, 2017.
(Image: © NASA Earth Observatory)

A set of bouncing baby volcanic vents is visible in a new astronaut photograph that doesn't look like it was taken over Earth.

But the image, released today (June 5) by NASA's Earth Observatory, is humanity's home planet. It's a shot of the Meidob Volcanic Field in western Sudan, where active volcanic processes have built lava domes, craters and vents. Some of those vents are less than 6 million years old, which is quite young by geologic standards.

An astronaut aboard the International Space Station snapped the shot of the volcanic field on January 1, 2017. Craters, cones and lava domes are visible in the central portion of the image. All told, the field spans 1,930 square miles (5,000 square kilometers) and is scattered with nearly 700 vents, according to the Smithsonian Institution's Global Volcanism Program.

It's an arid, rocky place marked by volcanic features: Shallow craters called maars that are made when magma hits groundwater and explodes, lava domes made when magma oozes out of the ground and piles up on the surface, and cinder cones that look like the typical grade-school rendering of a volcano.

Meidob originally developed between 7 million and 5 million years ago, according to a 1997 paper in the Journal of African Earth Sciences. The last confirmed eruptions at Meidob happened around 3000 B.C.