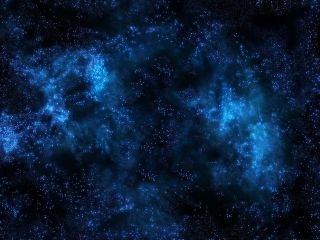 The truth is we don't really now if space goes on forever — by maybe, one day, we will find out.
(Image: © Sweetie187/flickr, CC BY-NC)

This is an article from Curious Kids, a new series aimed at children. The Conversation is asking kids to send in questions they'd like an expert to answer. All questions are welcome – serious, weird or wacky! This article was originally published at The Conversation. The publication contributed the article to Space.com's Expert Voices: Op-Ed & Insights.

Space probably does go on forever, but the truth is we don't know. Not yet anyway. That's what makes this a great question, because science is all about finding answers to things we don't know yet.

Not that long ago, people thought that when they looked up at the night sky, they were seeing all of space. That was until Edwin Hubble came along. He was an American astronomer and what he found out was so amazing that NASA named the famous Hubble Space Telescope after him.

Almost 100 years ago, Hubble, the astronomer, was looking at some small fuzzy patches of light hidden among all the stars we can see. No one was exactly sure what they were, but Hubble discovered that these patches of light were made of stars and even more importantly, they were a long way away.

With that one discovery, our idea of space exploded.

The stars we see in the night sky are part of the Milky Way Galaxy. That's the galaxy we belong to.

The patches of light that Hubble was studying were other galaxies – each one filled with stars and planets and lots of other things too. Some galaxies are smaller than our Milky Way and others are larger.

Space was a whole lot bigger than anyone had ever imagined.

How to see forever?

Space is big, but does it go on forever? The problem is we can't see forever. There's a limit to how much space we can see, just like we can't step outside our front door and see every city in Australia.

The part of space we can see is called the observable universe. It contains all the light we will ever be able to see (because when we look across space we are mostly looking for light).

The observable universe can even be measured. It is 93 billion light years from one side to the other. Now that's a distance even astronomers find hard to think about. It's like making about 300,000 laps of our Milky Way Galaxy, yet our Sun has only made 20 laps in its entire life. Or can you imagine lapping the Earth 20 million trillion times?

If our two bubbles overlapped, then the alien would see some of the same things we can see. But what about the places that are outside our bubble? Would the alien see emptiness at the edge of space?

No, probably not. What's more likely is they would see a part of space that we will never ever be able to see.

In theory space goes on and on…

So why do scientists think that space goes on forever? It's because of the shape of space. Our part of space, or the observable universe, has a special shape: it is flat.

That means if you and a friend each had your own rocket ship and you both took off and travelled in a straight line, forever and forever, you would never meet. In fact, you would always stay exactly the same distance apart, within the observable universe.

But this is a really special case. If space was shaped any other way, then lots of things could happen. Your two rockets, travelling in a straight line, might eventually cross paths or they might get really close but never meet or perhaps they'd go the other direction and drift away from each other.

But only flat space will keep the rockets exactly apart.

Scientists have an idea of how to solve this special flatness problem. And importantly, their idea solves some other problems as well to explain why space looks exactly the way we see it.

When one idea solves lots of problems, scientists call it a theory. It means we could be on the right track to finding an answer.

The theory says that space must be really, really big but we can only see a small part of it, and that part looks special and flat. It's kind of like how Earth seems flat, unless you are an astronaut floating in space. Up there, you see so much more of the Earth that it's possible to see how it curves away.

My bet is that space does go on forever. Maybe one day science will help tell us if that's true.

Hello, curious kids! Have you got a question you'd like an expert to answer? Ask an adult to send your question to us. They can:

Please tell us your name and age (and, if you want to, which city you live in). You can send an audio recording of your question too, if you want. Send as many questions as you like! We won’t be able to answer every question but we will do our best.