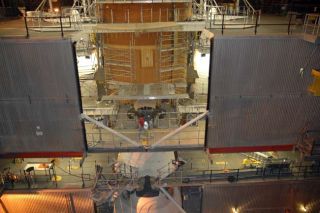 In Highbay 1 in the Vehicle Assembly Building, the space shuttle Atlantis' orbiter cockpit, nose cone and part of the external tank peak through various levels of scaffolding as work continues to repair the external tank.
(Image: © NASA/Jack Pfaller.)

NASAengineers have completed some repairs to the shuttle Atlantis' hail-damagedexternal fuel tank at the agency's Florida spaceport, where a possiblereplacement is due to arrive Friday, agency officials reported Thursday.

A bargecarrying the new shuttle fuel tank is expected to dock at NASA's Kennedy SpaceCenter in Cape Canaveral, Florida at about 1:00 p.m. EDT (1700 GMT), the spaceagency said in a mission update, adding that initialrepairs to the vital foam insulation covering the lower half of Atlantis' damagedtank are finished.

"Foamrepairs on the liquid hydrogen tank, which is located on the bottom of the externaltank, are complete," NASA reported. "The focus is currently on repairs to theliquid oxygen tank."

Theshuttle tank's liquid oxygen supply resides in the upper portion of the fuelvessel, where engineers have sanded away the damaged foam insulation and plan tospray on new layer of material.

Atlantisis currently slated to launch its ISS construction mission no earlier thanmid-May if its tank can be repaired swiftly, though a fuel tank change wouldpush the flight into June.

"Right nowI know they're working hard to repair the tank at this time," STS-117mission specialist Steven Swanson told SPACE.com Thursday, addingthat workers at NASA's New Orleans-based Michoud Assembly Facility -- whereshuttle fuel tanks are built -- are focused ensuring the fixes are sound. "Theengineers are working hard at Michoud on the certification of the repairs thatthey're doing. So that should all hopefully come together some time next weekand we'll find out what we'll do."

NASAmanagers are expected to meet around April 10 to decide whether or not toproceed with a mid-May launch target or switch tanks and aim for June. Atlantis'launch window in May closes around May 21 and reopens around June 8, NASAofficials have said.

Swanson,who will perform one of three planned spacewalks during the STS-117 flight,said the mission's delay has had a silver lining of sorts, allowing he and hiscrewmates a short break from the frenetic pace of flight training.

"It's allin stride, I think," said Swanson, who joined NASA's Astronaut Corps in 1998 andwill make his first spaceflight during STS-117, of the delay. "What's anothermonth of two after nine years?"