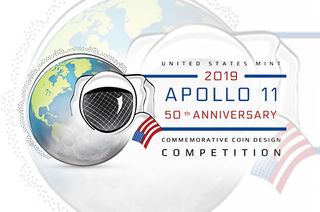 The United States Mint is launching an art competition for the design of its 2019 coins marking the 50th anniversary of the first moon landing.

As signed by President Barack Obama on Dec. 16, 2016, Public Law 114-282 authorizes the Secretary of the United States Treasury to strike and issue curved gold, silver and clad metal coins in recognition of the 1969 Apollo 11 lunar landing.

"This commemorative coin program offers an opportunity for our nation to recognize the 50th anniversary of the Apollo 11 mission, and to honor the United States space program leading up to the first manned moon landing," the U.S. Mint stated on its website.

The law stipulates a specific design be used for the convex reverse of each coin, but calls for the concave obverse, or front, to be selected by the Treasury Secretary based on a juried public competition. That contest, the "Apollo 11 50th Anniversary Commemorative Coin Design Competition," is set to begin on May 1. [NASA's Historic Apollo 11 Moon Landing in Pictures]

Phases of the moon (coin competition)

U.S. citizens who are 18 years of age or older have from May 1 to June 29 to enter the contest by submitting three to five digital samples of their original art through the Mint's website.

These samples, which the Mint says should demonstrate the artist's suitability for the competition, will be judged by a jury comprised of three members of the Citizens Coinage Advisory Committee and three from the U.S. Commission of Fine Arts, chaired by the Deputy Assistant Secretary for Management & Budget with the Treasury Department.

From all of the portfolios received, the jury will choose no more than 20 artists to submit a design for the coins in the second phase of the competition. Those selected will have from July 31 to Sept. 8, 2017 to submit a single design that is "emblematic of the United States space program leading up to the first manned moon landing."

The design will need to complement the coins' reverse, which will be a representation of an iconic photo taken on July 20, 1969 on the moon that shows the visor and part of the helmet of astronaut Buzz Aldrin, including the reflection of first moonwalker Neil Armstrong, the United States flag and the lunar module.

Each artist selected for the second phase will receive a fee of $500. The overall winner of the competition will receive an additional $5,000 and have his or her initials inscribed on the coins. The winning artist may also be invited to the Mint's ceremony, where the design will be unveiled.

The winning design will be announced in 2018. [Lunar Legacy: 45 Apollo Moon Mission Photos]

Makings of a moon coin

Beyond inscribing "Liberty," "In God We Trust," and "2019," the artists are free to propose the details of the coin's front (obverse) design.

The designs may not include the name or depiction of any living person, including an astronaut, even with permission (the reverse design is permitted to depict Aldrin because it was called for by Congress). The proposed design cannot include the names, emblems or logos associated with any specific organization.

The Mint advises on its website that it discourages designs "incorporating or derived from pre-existing works" such as photographs, unless they are the artist's own works.

The artists will submit a two-dimensional digital image, but they will need to consider the dimensions and shape of the coins when developing their design.

"Artists must think three-dimensionally and consider that curved coins in four sizes will bear the design," advises the Mint on its competition website.

Commemoratives with a cause

As with all its commemorative coin programs, which by law must be self-sustaining, the Mint is operating the Apollo 11 50th Anniversary Commemorative Coin Program, including the design competition, at no cost to taxpayers. The sale of the coins will cover the costs of the contest, as well as the creation and production of the coins.

An included surcharge will also fundraise for three causes related to the history and future of space exploration.

Half of the proceeds will be split between the Astronauts Memorial Foundation, for costs related to the preservation and enhancement of the Space Mirror Memorial in Florida, and the Astronaut Scholarship Foundation, which supports college students who are excelling in science, technology and engineering degrees.

The remaining half will go to the Smithsonian's National Air and Space Museum in Washington, D.C. for the design and installation costs related to establishing and maintaining its Destination Moon exhibit opening in 2020 and for the costs related to a traveling version of the exhibition set to begin this October.

The Apollo 11 50th Anniversary Commemorative Coins will mark the second time the U.S. Mint has honored the first moon landing. It did so first by using the Apollo 11 mission patch as the reverse design on the Eisenhower and Susan B. Anthony dollars issued from 1971 to 1981.