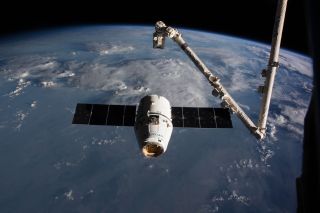 The spacecraft launched on a Falcon 9 rocket from Kennedy Space Center's historic Pad 39A on Feb. 19, and berthed with the station on Feb. 23 after a 24-hour delay. Dragon's journey home will be much shorter, however; it's slated to splash down in the Pacific Ocean at 10:54 a.m. EDT (1454 GMT) tomorrow, if everything goes according to plan. The craft's deorbit burn and splashdown will not be broadcast.

Within 48 hours of splashdown, representatives from NASA and the Center for the Advancement of Science in Space, which manages research on the ISS, will have the time-sensitive research samples from the craft in hand for analysis, NASA officials said in a statement. In addition to completed experiments, the spacecraft will carry equipment that's no longer in use, officials said during a post-launch briefing. That equipment will travel in Dragon's depressurized trunk and will be disposed of, the officials said.

According to NASA's space station blog, most of the spacecraft cargo was packed away by March 15, and this was mostly done during astronauts' off-duty or extra time during the workday. The hatch is scheduled to be closed for good today (March 18). The space station crew will bid a fond farewell to the craft, which brought science gear for more than 250 experiments, crucial supplies and station equipment — as well as Pesquet's old saxophone.