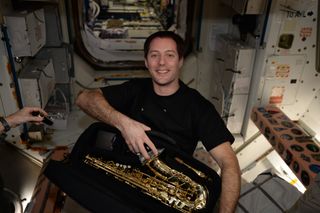 Space station astronaut Thomas Pesquet received a saxophone surprise for his birthday. It arrived on the SpaceX Dragon on Feb. 23 and was hidden by Pesquet's crewmates until his birthday on Feb. 27.
(Image: © ESA/NASA/Flickr)

Astronaut Thomas Pesquet, a flight engineer on the International Space Station, and a music aficionado, received a surprise birthday gift from his crewmates last month — his beloved old saxophone.

Pesquet hoped to bring it along when he launched to the space station on Nov. 17, but to his dismay, the instrument did not make it onto the flight. NASA decided to surprise him by sending it up with a cargo flight. The saxophone arrived on SpaceX's Dragon cargo craft on Feb. 23, and Pesquet's crewmembers hid it until his 39th birthday on Feb. 27.

"A birthday surprise arrived with @SpaceX Dragon, hidden by my teammates until 27 Feb in collusion with Houston! You can not trust anyone," Pesquet tweeted Sunday (March 12). [Astronaut Thomas Pesquet's Amazing Photos from Space]

But the saxophone wasn't the only birthday surprise stashed inside the Dragon cargo ship. NASA also sent him some French macarons — sweet meringue-based cookies that are not to be confused with coconut macaroons.

Before launching to the space station, Pesquet told Space.com that he "used to play the saxophone in a band," but that he hadn't practiced much since he started astronaut training. In an interview with CBS News, fellow astronaut Peggy Whitson said, "We'll let you know whether or not he's any good."

Although he hasn't been able to play his saxophone for a few months, Pesquet has been getting his groove on at the space station. The astronaut regularly tweets the music he's listening to with the hashtag #songs4space, and recently did a music video with the French electronic music producer Yuksek.