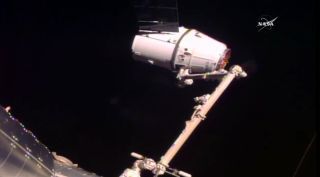 A SpaceX Dragon space capsule is seen just after being captured by astronauts using a robotic arm at the International Space Station on Feb. 23, 2017. The SpaceX capsule is carrying 5,500 lbs. of supplies for the station's six-person crew.
(Image: © NASA TV)

A SpaceX Dragon cargo ship filled with more than 2 tons of NASA supplies has arrived at the International Space Station (ISS) after a one-day delay due to a navigation software glitch.

The Dragon space capsule was captured today (Feb. 23) by the station's robotic arm at 5:44 a.m. EST (0944 GMT) by astronauts Shane Kimbrough of NASA and Thomas Pesquet of the European Space Agency.

"With that capture, a Dragon has now officially arrived to ISS," Pesquet radioed to NASA's Mission Control center in Houston after the successful rendezvous. "We're very happy indeed to have it on board and very much looking forward to putting to good use the two-and a half tons of science it carries." [Watch SpaceX Launch Dragon Into Space]

Thursday's orbital arrival comes 24 hours after Dragon aborted its first approach to the station. The spacecraft's onboard computers detected an incorrect value in the global positioning system data that pinpoints the Dragon's location in space relative to the station, NASA officials said. It was an easily corrected glitch, but did require Dragon to orbit Earth one extra day before another rendezvous attempt.

"Great job with Dragon capture and sorry about the delay," astronaut Mike Hopkins of NASA radioed to the crew from Mission Control. "Now the real work starts."

With Dragon captured, flight controllers in Mission Control will remotely use the station's robotic arm to park the spacecraft at an Earth-facing port on the orbiting lab's Harmony module. You can watch that Dragon berthing live here, courtesy of NASA TV, beginning at 8 a.m. EST (1300 GMT).

Dragon is delivering about 5,500 lbs. (2,500 kilograms) of supplies for the station's six-person crew. That haul includes science gear for more than 250 experiments on the station, NASA officials have said. It is SpaceX's tenth delivery mission for NASA under a commercial cargo contract.

SpaceX launched the space capsule into orbit Sunday (Feb. 19) using a Falcon 9 rocket that lifted off from NASA's historic Pad 39A at the Kennedy Space Center — marking the first private rocket flight from the pad.

It's a busy traffic week at the International Space Station.

In addition to Dragon, the Russian Progress 66 cargo ship is headed to the space station to deliver nearly 3 tons of more supplies to the orbiting launch. Russia's space agency Roscosmos launched the resupply ship on Wednesday.