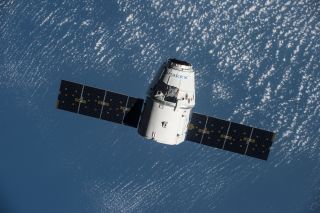 This view of a SpaceX Dragon cargo ship as seen from the International Space Station is a NASA file photo from a July 2016 mission. On Feb. 22, 2017, a Dragon capsule aborted its approach to the station due a navigation software issue.
(Image: © NASA)

A SpaceX Dragon cargo ship packed with nearly three tons of supplies aborted its rendezvous to the International Space Station early Wednesday (Feb. 22) due to a navigation software glitch, NASA officials said. The supply ship will now aim for a Thursday arrival at the station.

The unpiloted Dragon capsule aborted its approach to the space station at 3:25 a.m. EST (0825 GMT) when it detected an incorrect value in the relative global positioning system software used to pinpoint its place in the sky with the orbiting lab, NASA spokesman Rob Navias said during live commentary. The spacecraft was about 1,200 meters — just over seven-tenths of a mile — from the station when the glitch occurred, he added.

At no point were the astronauts and cosmonauts aboard the space station in any danger, Navias said.

"Dragon itself is in excellent shape," Navias said. "It did exactly what it was designed to do, breaking out of a rendezvous approach when it saw an incorrect value." [In Photos: SpaceX's Dragon Launch to Space Station]

Navias said the navigation software issue can be corrected by SpaceX engineers, allowing Dragon to deliver its 5,500 lbs. (2,500 kilograms) of supplies to the space station's crew early Thursday. Dragon launched toward the space station Sunday (Feb. 19) atop a SpaceX Falcon 9 rocket that lifted off from NASA's historic Pad 39A at the Kennedy Space Center, a first for the Hawthorne, Calif.-based spaceflight company. The mission is SpaceX's tenth cargo delivery flight for NASA.

"Dragon is in good health and will make another rendezvous attempt with the @Space_Station Thursday morning," SpaceX representatives wrote in a Twitter post. The cargo ship is following a preplanned "race track" path that will bring it back in range for a docking tomorrow, NASA officials said.

The 24-hour delay will not adversely impact any of the science or supplies aboard Dragon, Navias said. The science gear on the spacecraft includes several biological experiments.

Dragon is now scheduled to arrive at the space station and be captured by a robotic arm at 6 a.m. EST (1100 GMT) on Thursday. NASA will broadcast the rendezvous on NASA TV beginning at 4 a.m. EST (0900 GMT), and you can watch that Dragon arrival webcast here, courtesy of NASA. A follow-up broadcast at 8 a.m. EST (1300 GMT) will cover Dragon's attachment to the station's Earth-facing Harmony module.

Meanwhile, another cargo ship — this one from Russia —is making its way to the International Space Station.

Progress 66 is packed with 3 more tons of supplies for the space station's six-person crew. It is Russia's first Progress supply ship to fly since the loss of the Progress 65 cargo ship shortly after its launch on Dec. 1, 2016.