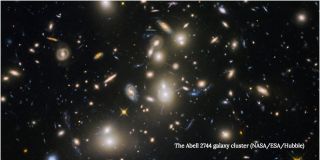 A new technique that removes the light of foreground galaxy clusters is giving astronomers a direct look at a generation of galaxies dating back to the universe's baby years.

The discovery is considered a key piece of evidence for a critical, but poorly understood period of time when the universe switched from being dark to radiating light.

Scientists theorize that energy from first-generation galaxies transformed the dark, electrically neutral universe into ionized and radiating plasma. But these faint galaxies are not easy to find.

This week, University of Texas astronomer Rachael Livermore and colleagues describe a successful hunt thanks to a new technique that combines deep-field Hubble Space Telescope images with what is known as "wavelet decomposition" — a light-masking equivalent of noise-canceling headphones — to computationally remove light from foreground galaxy clusters.

"The wavelet transform allows us to decompose an image into its components on different physical scales. Thus, we can isolate structures on large scales… and remove them, allowing objects on smaller scales to be identified more easily," the scientists wrote in a draft of their upcoming paper, published on arXiv.org.

Ironically, astronomers first have to rely on galaxy clusters, which warp spacetime with their massive gravity, to serve as naturally occurring lenses that boost Hubble's resolving power more than 100 times.

By then masking the light, Livermore, University of Texas astronomer Steven Finkelstein and Space Telescope Science Institute astronomer Jennifer Lotz found 167 galaxies that are 10 times fainter than any previously known, a number that shows "strong support" for how many early galaxies would have been needed to re-ionize the universe.

A more direct detection method will come after Hubble's successor, the James Webb Space Telescope, is launched next year.

WATCH VIDEO: What Can Giant Telescopes Reveal About Our Cosmos?