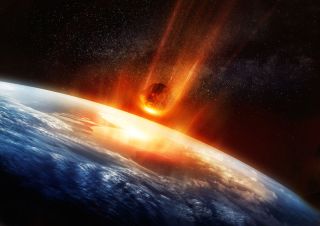 When a giant asteroid careened into Earth about 66 million years ago, the enormous collision led to the formation of an airborne "curtain" of sulfate molecules that blocked the sun's light and led to years of freezing cold and darkness, a new study finds.

The finding shows how these droplets, or aerosols, of sulfuric acid formed high in the atmosphere, and likely contributed to the deaths of 75 percent of all animals on Earth, including nonavian dinosaurs such as Tyrannosaurus rex and long-necked sauropods, the researchers said.

Earlier studies suggested that the dino-killing asteroid kicked up dust and debris that hung in the air and blocked sunlight in the short term. But by using computer simulations, the researchers of the new study showed how droplets of sulfuric acid contributed to long-term cooling. [Wipe Out: History's Most Mysterious Extinctions]

Moreover, the sudden, drastic drop in temperature likely caused the surface of the oceans to cool, which would have massively disturbed the marine ecosystems, the researchers said.

"The big chill following the impact of the asteroid that formed the Chicxulub crater in Mexico is a turning point in Earth history," the study's lead researcher Julia Brugger, a climate scientist at the Potsdam Institute for Climate Impact Research (PIK) in Germany, said in a statement. "We can now contribute new insights for understanding the much debated ultimate cause for the demise of the dinosaurs at the end of the Cretaceous era."

Brugger and her colleagues employed a type of computer simulation typically used for climate modeling. The model showed that gases containing sulfur evaporated during the violent impact. These sulfuric molecules were the main ingredients that blocked the sun's light on Earth and led to plummeting temperatures, they said.

"The long-term cooling caused by the sulfate aerosols was much more important for the mass extinction than the dust that stays in the atmosphere for only a relatively short time," study co-researcher Georg Feulner, a climate scientist at PIK, said in the statement. "It was also more important than local events like the extreme heat close to the impact, wildfires or tsunamis."

In all, it took 30 years for Earth's climate to recover, the researchers said.

As the air cooled, so did the ocean's surface waters. This cold water became denser and thus heavier, and sank into the depths of the ocean. Meanwhile, warmer water from the deeper ocean rose, bringing up nutrients that likely led to giant algal blooms, the researchers said.

It's possible these algal blooms produced toxic substances that affected life along the coasts, the researchers said. But regardless of whether they were toxic or not, the ocean's massive mixing would have disrupted the marine ecosystem, and likely contributed to the extinction of its species, including the ammonites and the reptilian sea beasts known as plesiosaurs.

The new research illustrates what might happen to Earth if another asteroid were to cross its path, the researchers said.

"It is fascinating to see how evolution is partly driven by an accident like an asteroid's impact — mass extinctions show that life on Earth is vulnerable," Feulner said. "It also illustrates how important the climate is for all life-forms on our planet. Ironically today, the most immediate threat is not from natural cooling but from human-made global warming."

The study was published online Jan. 13 in the journal Geophysical Research Letters.