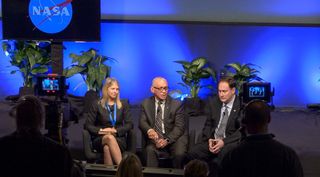 Lightfoot, the top civil servant at NASA, told employees in an internal memo Jan. 20 that he was "filled with humility and optimism" as he temporarily assumed leadership of the agency. He took over from Charles Bolden and Dava Newman, who stepped down as administrator and deputy administrator, respectively, at the end of President Obama's term.

"To be entrusted with this incredible agency, no matter how long, is an honor, and I commit to serving this team to the best of my ability so we can accomplish our ambitious missions and make this nation proud," Lightfoot said in the memo.

How long Lightfoot will remain acting administrator is not clear. The Trump administration has not announced a nominee for the position of NASA administrator. Once announced, it will likely be several weeks before the Senate votes to confirm the nomination.

Autry is an assistant professor of entrepreneurship at the University of Southern California who has been a proponent of commercial space activities. Autry was one of eight members of the agency review team, or "landing team," assigned to NASA by the transition office of then President-elect Trump.

Noble did not serve on the landing team, but worked on the Trump campaign as a political data analyst. Noble, who earned a Ph.D. in environmental studies from the University of Colorado, spent seven years at the NASA Goddard Institute of Space Studies in New York, working on weather and climate models.

Lightfoot, who said in a Jan. 17 speech that he expected some members of the landing team to stay on at NASA as members of the beachhead team, suggested in the memo that Autry and Noble would soon be joined by others. "There will be other new and familiar faces arriving at Headquarters, and we will communicate with you as often as possible to keep you apprised of those developments," he wrote.

Besides Bolden and Newman, one other NASA official departed Jan. 20. Although previous reports indicated that NASA Chief Financial Officer David Radzanowski would stay on temporarily after the inauguration of President Trump, the biography of Radzanowski on the NASA website states that he resigned on Jan. 20. The position of chief financial officer, like that of administrator and deputy administrator, is one where administration nominees require Senate confirmation.

Despite the incoming and departing personnel, there were no obvious signs of major immediate changes at the agency as President Trump was sworn into office Jan. 20. At the time of the inauguration ceremony NASA was conducting a teleconference regarding its call for proposals for the next New Frontiers mid-sized planetary science mission. The teleconference continued uninterrupted.