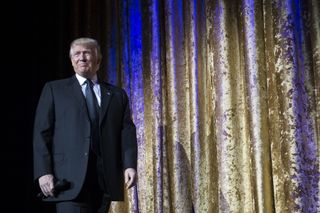 Ahead of Donald Trump's presidential inauguration today (Jan. 20), here are six things to know about the soon-to-be-president's actions and projected plans relating to NASA.

Trump likely will have to make big decisions about NASA's plans for Mars.

The incoming president likely will have to make decisions regarding a few key NASA programs, according to space policy experts who spoke with Space.com prior to the Nov. 8 election. [Top Space Issues Facing President-Elect Donald Trump]

Currently, NASA is planning to send humans to Mars as early as the 2030s using a heavy-lift rocket called the Space Launch System (SLS) that the agency is building in-house. NASA also will use the Orion spacecraft to carry humans atop the SLS. The Orion spacecraft has undergone one test flight; the SLS has yet to complete a test launch. The SLS will have the boost necessary to propel humans to the moon, Mars or other deep-space destinations, and there is currently no other operating rocket with that kind of power.

"The next president is inheriting a space program that has this nascent ambition to go to Mars but doesn't have hardware actually flying yet," Casey Dreier, director of space policy at The Planetary Society, told Space.com in November. "So there's a lot of opportunity for the next administration to say, 'Should we continue these [programs]? What will the direction be? Do we want to commit to supporting these programs as is? Do we change them? Do we cancel them?' … So it's a big question mark."

In his 2011 budget request, President Barack Obama effectively canceled NASA's Constellation Program, which would have returned humans to the moon, although pieces of the Constellation Program were folded into the SLS and Orion programs. There is debate among human-spaceflight experts about whether building a more permanent human presence on the moon is a necessary step on the way to sending humans to Mars.

As president, Trump may not cancel NASA's Mars mission entirely, but it's possible that the next administration will tell the agency to cancel the SLS program and instead utilize the heavy-lift rocket being developed by the private spaceflight company SpaceX, Brian Berger, managing editor of SpaceNews, said during a webinar shortly after Trump's election. The Falcon Heavy rocket will also have the ability to send a spacecraft all the way to Mars. SpaceX founder and CEO Elon Musk has laid out his long-term goals for colonizing Mars; in the near term, the company plans to send its own uncrewed spacecraft to Mars as early as 2018. Supporters of the SLS program have argued that two transportation systems to the Red Planet would be safer for astronauts (so if either rocket system failed during a supply delivery, for example, there would be a backup).

Beyond NASA's Mars program, Trump could have to make decisions regarding NASA's commitment to the International Space Station. The agency is committed to its current level of funding for the station through 2024. Agency representatives have said they hope private industry will take up a bigger role in low-Earth-orbit activities. Right now, the station serves as a national laboratory, where scientists and private companies can conduct research in microgravity. Members of private industry have spoken about the possibility of shifting microgravity research into private space stations.

President-elect Trump has sent "landing teams" to some of the major federal agencies in order to assist in the transition to the new administration. The NASA landing team consists mainly of people who have experience working for or with NASA.

Leading the team is Chris Shank, who worked as NASA's director of strategic investments from 2005 to 2009. Until recently, Shank served as policy director for the House Committee on Science, Space and Technology, and prior to that, he was deputy chief of staff for Rep. Lamar Smith, R-Texas, chairman of the committee.

Other members of the transition team include former NASA astronaut Sandra Magnus, who flew to space three times and has been executive director of The American Institute of Aeronautics and Astronautics since 2012; and Steve Cook, who was in charge of the Ares 1 and Ares 5 rocket programs at NASA's Marshall Space Flight Center in Huntsville, Alabama, and has also worked in the industry since leaving NASA.

The benefit of an experienced landing team is that the current NASA employees "can skip the 'NASA 101' lesson and dive right into a lot of the details" of various programs, according to Jeff Foust, a senior writer at SpaceNews. (SpaceNews is a Space.com syndication partner.) Foust spoke during a session focused on the presidential transition at the 229th meeting of the American Astronomical Society (AAS) in Grapevine, Texas, earlier this month.

Foust also noted that the transition team members' opinions do not necessarily reflect the stances that the Trump administration will take on issues pertaining to NASA.

Recently, Robert Lightfoot, NASA's associate administrator, announced that some of the transition team members will remain at the agency past Jan. 20. (Typically, transition teams depart once the president-elect is sworn into office.)

Trump has not yet appointed the top leaders who will influence space policy.

Trump has nominated candidates for a number of federal leadership positions, including for the head of the Department of Energy, but he has not chosen nominees for the positions of NASA administrator, NASA deputy administrator or head of the White House Office of Science and Technology Policy. (The latter is often referred to as the "White House science adviser.")

It's not atypical for a new NASA administrator to be nominated weeks or months after a president is inaugurated. Obama did not nominate former astronaut Charles Bolden to the position until May 2009, and Bolden wasn't approved by Congress until July of that year. A few names have been floated by industry insiders for potential NASA administrator candidates, according to an article by SpaceNews. Until a NASA administrator is appointed, Lightfoot will serve as acting administrator.

The panel of speakers at the AAS presidential session seemed more concerned that a nominee had not been selected for the position of White House science adviser. Rick Mertens, associate director of the Office of Federal Relations for the Texas A&M University System, said he had heard rumors that the president might not appoint anyone to that position.

"That remains to be seen," Mertens said. "But it can be a very critical position, not only in helping set policy in the science area for the next president, but [also in having] … someone that is a point person to explain [to the president] how they're handling science within the administration."

It's possible that Trump will side with some members of Congress in a push to reduce or eliminate NASA's Earth Science program. In an op-ed for SpaceNews published on Oct. 19, 2016, Robert S. Walker and Peter Navarro, who acted as advisers to the Trump campaign, said "NASA should be focused primarily on deep-space activities rather than Earth-centric work that is better handled by other agencies."

This stance is not new, however. Members of Congress — including Smith and Sen. Ted Cruz, R-Texas, chairman of the Senate Subcommittee on Space, Science and Competitiveness — have said that Earth science falls outside NASA's mission and should be handled by another agency (most likely the National Oceanic and Atmospheric Administration, or NOAA). NASA officials have pushed back against that characterization and have emphasized that Earth science is an important aspect of the agency's mission.

Recently, Michael Freilich, head of NASA's Earth Science division, said he anticipates a stable budget for the program for the remainder of the fiscal year (which ends Sept. 30).Freilich has also encouraged scientists in the Earth Science division to remain calm in the face of an uncertain future.

An Oct. 19 op-ed written by Walker and Navarro announced the possibility of reinstating the NSC. The authors wrote that incoming Vice President Mike Pence would chair the space council.

Experts have noted, however, that reinstating a national space policy council doesn't guarantee that the president will make space a priority, and it doesn't provide any insight into the specific policies or programs that the president might support.

"It's utterly up to [the] president how much he or she listens to [the council]," Dreier told Space.com prior to the Nov. 8 election. Appointing a space council is "not a bad thing, but it's not a slam dunk, either," Dreier said. "It is an encouraging sign that [space] will be taken seriously, but it's not a requirement."

Experts interviewed by Space.com have also expressed concerns about the potential downsides of reinstating the council.

Trump hasn't offered many details about his plans for science or space policy, according to the speakers in the presidential session at the AAS meeting. Trump's lack of details on space policy is not surprising, however, because space isn't a major campaign issue, so candidates aren't pushed to make strong commitments regarding space, according to the panelists.

But prior to the Nov. 8 election, the Trump campaign did express its support for public-private partnerships in spaceflight, which very likely means that under Trump's administration, NASA will continue to offer contracts to private companies such as SpaceX and Boeing for certain tasks, like sending supplies to the International Space Station.

"Public-private partnerships should be the foundation of our space efforts," Walker and Navarro wrote in the Oct. 19 SpaceNews op-ed. "Such partnerships offer not only the benefit of reduced costs, but the benefit of partners capable of thinking outside of bureaucratic structures and regulations."

That stance is essentially in line with what NASA is already doing. The agency has a long history of working with private companies to fulfill various needs within its spaceflight and science programs. NASA relies on companies such as Orbital ATK, Cygnus, SpaceX and Boeing to provide rockets and spacecraft that the agency uses to send nonhuman payloads into space. NASA is now entering new territory as it prepares to send humans to space aboard commercially built spacecraft.