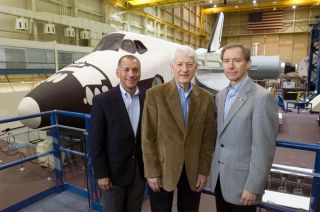 Bolden, a retiredU.S. Marine Corps major general, met with Obama atthe White House on May 19 to discuss the job.

The sevenastronauts aboard Atlantis are now slated to landSunday to end a 13-day mission to overhaul the Hubble Space Telescope forthe fifth and final time.

MissionControl radioed the news of Bolden?s nomination to Atlantis commander ScottAltman so he could alert his crew.

?Roger,thanks for the news on the announcement,? Altman said. ?I guess it wasn?t anyof us up here on the flight after all.?

Altman andhis crew spoke with Obama on Wednesday during a private call that was lateraired on NASA TV.

?We're soongoing to have a new NASA Administrator,? Obama said during the call. ?I can'tdisclose it to you, because I've got to have hoopla on the announcement backhere on Earth. But I can assure you that it's a high priority of mine torestore that sense of wonder that space can provide and to make sure that we'vegot a strong sense of mission, not just within NASA but for the country as awhole.?

Altmanthanked the President and said he hoped his crew?s mission to fixHubble for the last-ever time helped capture some of that senseof exploration. He also tried asked the president who his pick for NASA chiefmight be.

?Just so we're sure, the new administrator's not any of us on the flight deckright now, is it?,? Altman asked.

?You know,I'm not going to give you any hints,? Obama said.