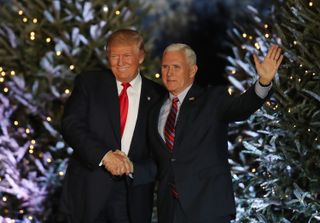 President-elect Donald Trump and Vice President-elect Mike Pence appear together during a stop on his 'USA Thank You Tour 2016' on Dec. 16 in Orlando, Florida. The Trump administration has expressed interest in reviving the National Space Council, which the vice president traditionally chairs, to oversee U.S. space policy.
(Image: © Joe Raedle/Getty Images)

As the incoming administration of President-elect Donald Trump kicks into high gear, the future of the country's civil and military activities in space is on the table.

Late in the 2016 presidential race, the Trump campaign aired the idea of relaunching the National Space Council (NSC) to oversee U.S. space policy. When NASA was formed, the National Aeronautics and Space Act of 1958 mandated an aeronautics and space advisory group as a mechanism to help guide America's space agenda. Over the following decades there has been an on-again, off-again history of a National Space Council to serve the U.S. President.

The idea of such a Council is seemingly in play again in the wake of the 2016 election. But just how politics, agency cultures, personalities, and budget constraints play nice with each other in 2017 – in terms of resuscitating a National Space Council – is anybody's guess.

Under such a plan, the council would be established within the Executive Office of the President of the United States, and would likely be chaired by Vice President Mike Pence after the new administration takes office.

In a pre-presidential election speech in Florida, Pence sketched out elements of the campaign's space policy — one that reconstitutes the National Space Council to focus on human space exploration and the augmented use of public-private partnerships. "Our space program needs new leadership, and a new vision," he said. [Related: What a Trump Administration Means for NASA]

But if a National Space Council were to be re-established, how useful would it be? Space.com interviewed a variety of space experts, both for and against the idea, to find out.

Apollo 11 astronaut Buzz Aldrin, the second man to walk on the moon, told Space.com that a NSC led by the incoming vice president would be "absolutely critical in ensuring that the president's space priorities are clearly articulated, and effectively executed."

However, Marcia Smith, editor of SpacePolicyOnline.com, added a cautionary note.

"A White House National Space Council can be useful if the president wants one and is willing to back it up when other White House offices, like the Office of Management and Budget, balk at its recommendations. If not, then it is a waste of resources," Smith told Space.com.

Smith added that a National Space Council would be more effective if there were to be a positive relationship between its personnel and those in the departments, agencies and industries whose activities it is seeking to coordinate.

"Adversarial relationships will undermine the entire enterprise," she said.

Apollo astronaut Harrison "Jack" Schmitt also weighed in on the prospect of a National Space Council. After his Apollo 17 moon landing in 1972, Schmitt served in the U.S. Senate, in a six-year stint representing New Mexico. [50 Years of Presidential Visions for Space Exploration]

A few years ago, Schmitt proposed dismantling NASA and advocated the creation of a new, National Space Exploration Administration (NSEA).

"If the Trump administration pursues a vigorous and permanent deep-space exploration program — one that looks at the moon as a necessary springboard to Mars — all that would be necessary would be to give the NASA administrator, or new agency administrator, full authority and necessary funding to implement that program," Schmitt told Space.com

An NSC chaired by the vice president, Schmitt said, "might add clear White House support for the program, but it also probably would add another layer of bureaucracy on top of the [Office of Management and Budget]."

John Logsdon, professor emeritus of political science and international affairs at The George Washington University's Space Policy Institute, has debated the idea of whether a National Space Council is necessary.

He said he wonders whether there is one organizational structure or presidential approach that would serve the United States best in aximizing the contributions of its civilian, military, intelligence and commercial space capabilities. However, "Experience suggests that there is no one 'best' way of organizing the presidency for space," Logsdon said. [In Photos: President Obama and NASA]

According to Logsdon, the idea of a National Space Council to coordinate U.S. civilian, defense, intelligence and commercial space activity is far from new. It was tried from 1958 to 1973, he said, and then again from 1989 to 1993, and did not demonstrate enough value to be made a lasting part of the institutional presidency.

Obama raised the idea again during his 2008 presidential campaign, but it never came to be, Logsdon added.

Logsdon said many approaches to organizing White House space policy management are possible; most have been tried in the last half century.

However, "a separate White House space council has not been successful in demonstrating its superiority as an organizational approach," Logsdon noted.

"It seems to me that giving the National Security Council the staff it would need to play this coordinating role is a better option," Logsdon said, "since from the president's perspective, the U.S. space program is a tool of broader economic, foreign policy and security goals, and the NSC and its staff are best positioned to link U.S. space capabilities to those goals."

Also taking a hard look at the history and potential of a National Space Council is James Vedda, a senior policy analyst at The Aerospace Corporation's Center for Space Policy and Strategy in Arlington, Virginia.

In a recent paper on the topic, Vedda reviewed the on-again, off-again history of the National Space Council.

Space advisory groups in the Executive Office of the President "have produced mixed results, more negative than positive," Vedda wrote. "It should not be surprising that from 1958 through today, the senior management of NASA and DoD [Department of Defense] have not favored a National Space Council, viewing it as a barrier between themselves and the president that will do little more than slow things down."

This relatively unproductive history, Vedda noted, "will be repeated if the administration establishes a space advisory mechanism that is too cumbersome, too far removed from senior decision makers, or poorly staffed."

Vedda added that the effectiveness of such groups has varied depending on their organizational structure and staffing, the president's level of interest, relationships with Congress and relevant agencies, the events driving the agenda, and individual personalities.

On the other hand, a National Space Council conducted properly "could go a long way toward efficiently setting goals and addressing issues that cut across the civil, commercial and national security space sectors, and therefore across several agencies," Vedda said.

Some of the cross-cutting issues flagged by Vedda include the following:

The bottom line, according to Vedda, is that a space council in the Executive Office of the President "can be a boon if it works well — aligning policy and strategy across the civil, commercial and national security space sectors to serve national interests — or a wasteful exercise if it doesn't," Vedda wrote.

Leonard David is author of "Mars: Our Future on the Red Planet," published by National Geographic. The book is a companion to the National Geographic Channel six-part series, Mars. A longtime writer for Space.com, David has been reporting on the space industry for more than five decades. Follow us @Spacedotcom, Facebook or Google+. Originally published on Space.com.