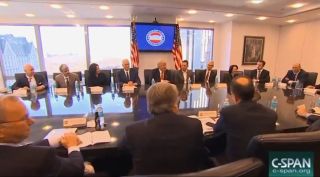 WASHINGTON — Elon Musk, the founder and chief executive of SpaceX, has joined a group created by President-elect Trump to provide advice on the economy for the incoming administration.

The addition of Musk to the President's Strategic and Policy Forum came as he and a number of other executives from technology companies, including Blue Origin founder Jeff Bezos, met with Trump and his senior advisors in New York Dec. 14 to discuss economic issues.

The forum, established by Trump Dec. 2 with an initial roster of 16 current and former executives, is intended to serve as an advisory board on economic issues for the incoming administration. "The Forum is designed to provide direct input to the President from many of the best and brightest in the business world in a frank, non-bureaucratic and non-partisan manner," the office of President-elect Trump said in a Dec. 14 statement.

Musk and two other executives added to the forum, the chief executives of PepsiCo and Uber, bring the forum's membership to 19. The only other member with aerospace industry experience is Jim McNerney, the former president and chief executive of Boeing, who led the company for a decade after working at General Electric and 3M.

The announcement came the same day that Musk, Bezos, and nearly a dozen other technology company executives met with Trump, Vice President-elect Mike Pence, and other senior advisors in New York. The meeting was closed to media beyond introductory remarks where attendees introduced themselves.

Musk identified himself as the chief executive of SpaceX and electric car manufacturer Tesla, "building rockets and cars and solar stuff in the U.S. I'm really excited about expanding our manufacturing footprint in the U.S."

"I'm super excited about the possibility that this could be the innovations administration," said Bezos, after introducing himself as the head of online retailer Amazon.com.

Also in attendance at the meeting was Peter Thiel, the billionaire investor who supported Trump during the presidential campaign. Thiel is the co-founder of the venture capital firm Founder's Fund, whose investments include SpaceX.

Prior to the election, both Bezos and Musk had been critical of Trump. In a Nov. 4 interview with CNBC, Musk said he did not consider Trump "the right guy" to be president. "He doesn't seem to have the sort of character that reflects well on the United States.”

Jeff Bezos has previously been a target for attacks by Trump, in part because of Bezos' ownership of the Washington Post. Bezos at times responded with humor: "Will still reserve him a seat on the Blue Origin rocket," Bezos tweeted in December 2015 after comments from Trump.

Bezos, in a conference speech in October, criticized Trump for a lack of "appropriate behaviors" in the campaign, including attacks on the media. "That erodes our democracy around the edges," he said.

Attendees of the hour-long event did not discuss the details about what was discussed, but one space organization endorsed the meeting in general. "Happy to see U.S. commercial tech leaders meet with new administration to discuss importance of innovation and high tech jobs in 21st century!" tweeted the Commercial Spaceflight Federation, an industry group whose members include Blue Origin and SpaceX.