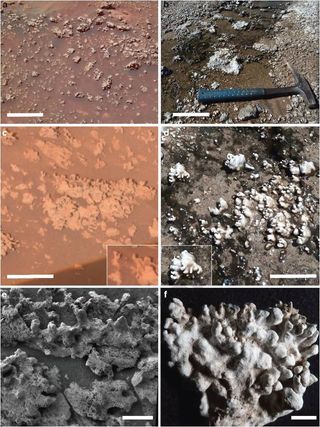 During its wheeled treks on the Red Planet, NASA's Spirit rover may have encountered a potential signature of past life on Mars, report scientists at Arizona State University (ASU).

To help make their case, the researchers have contrasted Spirit's study of "Home Plate" — a plateau of layered rocks that the robot explored during the early part of its third year on Mars — with features found within active hot spring/geyser discharge channels at a site in northern Chile called El Tatio.

The work has resulted in a provocative paper: "Silica deposits on Mars with features resembling hot spring biosignatures at El Tatio in Chile." [5 Bold Claims of Alien Life]

As reported online last week in the journal Nature Communications, field work in Chile by the ASU team — Steven Ruff and Jack Farmer of the university's School of Earth and Space Exploration — shows that the nodular and digitate silica structures at El Tatio that most closely resemble those on Mars include complex sedimentary structures produced by a combination of biotic and abiotic processes.

"Although fully abiotic processes are not ruled out for the Martian silica structures, they satisfy an a priori definition of potential biosignatures," the researchers wrote in the study.

Spiritlanded on Mars in January 2004, a few weeks before its twin, Opportunity, touched down in a different part of the Red Planet. Both golf-cart-size rovers were tasked with looking for signs of past water activity during their missions, which were originally planned to last three months.

An origin via either fumarole-related acid-sulfate leaching or precipitation from hot spring fluids was considered possible. "However, the potential significance of the characteristic nodular and [millimeter]-scale digitate opaline silica structures was not recognized," Ruff and Farmer noted in the new study.

"Such conditions provide a better environmental analog for Mars than those of Yellowstone National Park (USA) and other well-known geothermal sites on Earth," suggested Ruff and Farmer. "Our results demonstrate that the more Mars-like conditions of El Tatio produce unique deposits, including biomediated silica structures, with characteristics that compare favorably with the Home Plate silica outcrops. The similarities raise the possibility that the Martian silica structures formed in a comparable manner."

Previously, a NASA science team defined a potential biosignature as "an object, substance and/or pattern that might have a biological origin and thus compels investigators to gather more data before reaching a conclusion as to the presence or absence of life."

"Because we can neither prove nor disprove a biological origin for the microstromatolite-like digitate silica structures at Home Plate, they constitute a potential biosignature according to this definition," Ruff and Farmer wrote.

Spirit bogged down on Mars in May 2009, becoming stuck in soft soil.

In late January 2010, after months of attempts to free the rover, NASA dubbed the wheeled robot a stationary research platform. The lack of mobility and the harsh climes of Mars conspired to seal Spirit's fate, with attempts to regain contact with the robot ending in May 2011. Subsequently, NASA announced the end of contact efforts and the completion of Spirit’s mission. (Opportunity is still going strong today.)

"However, because of the challenges in obtaining unambiguous evidence in situ, coordinated microscopic and compositional analyses of samples returned to laboratories on Earth may be required to reach a robust conclusion as to the presence or absence of past Martian life in these rocks," Ruff and Farmer stated.

The new study can be viewed here: http://www.nature.com/articles/ncomms13554

Leonard David is author of "Mars: Our Future on the Red Planet." The book is a companion to the National Geographic Channel six-part series airing in November. A longtime writer for Space.com, David has been reporting on the space industry for more than five decades. Follow us @Spacedotcom, Facebookor Google+. Story published on Space.com.