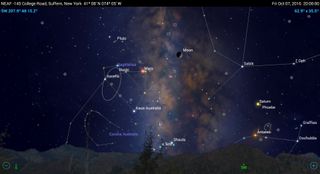 When you look at the night sky, you're seeing light that has traveled from the past. This fall, the southwestern horizon features Mars and Saturn, lit by reflected sunlight that has taken 9 and 88 minutes, respectively, to reach Earth from their surfaces. The light from the bright-red star Antares in Scorpius has been traveling for 550 years, so it's 550 light-years away. At a distance of about 1.3 light-seconds, the moon is right on our doorstep, while the invisible center of our Milky Way galaxy, located just west of the Teapot asterism in Sagittarius, is 26,000 light-years away.
(Image: © SkySafari App)

Did you know that if you gaze up at a clear evening sky, you're actually looking into the past? Even with the naked eye, you can see starlight that was emitted years — or even centuries — ago. And if you know where to look, you can see galaxies so far away that their light has been traveling since before humans walked the Earth. Add the magnifying power of a telescope, and you'll journey to the time when dinosaurs lived. In this edition of Mobile Astronomy, we'll travel the celestial and see ancient starlight with our own two eyes.

The speed of light

Starlight is the visible part of an electromagnetic spectrum of radiation that our eyes have evolved to detect. Beyond the visible range are radio waves, X-rays and infrared. In the vacuum of space, electromagnetic radiation travels at a speed of 186,282 miles per second (or 299,792 km/s), usually denoted with a "c." Albert Einstein showed that the speed of light is the top speed possible in the universe. Because of this, light from distant objects takes a long time to reach our eyes.

Space is so vast that distances soon become cumbersome to convey using everyday units. To write out the distance in miles to a nearby galaxy, you would need 19 zeros! As such, astronomers have adopted the term "light-year" — the distance light travels in a vacuum in one year. It's 5,878,625,541,248 miles (9,460,730,743,054 km), or almost 6 trillion miles (more than 9 trillion km)! See what I mean? [Einstein's Theory of General Relativity Explained (Infographic)]

We can measure the distance to closer objects using light-minutes and light-seconds. For example, if a person in Los Angeles could see it, the light from a lamp switched on in New York City would cross the country to arrive 13 milliseconds later, after traveling 0.013 light-seconds. Moonlight takes 1.3 seconds to reach us on the ground. During the Apollo missions, the radio signals experienced the same delay, causing two-way conversations to be choppy. The light from the sun takes about 8 minutes and 20 seconds to travel to Earth, so we can say that it's 8.3 light-minutes away.

Our planetary neighbors are far, but not too far. Right now, Venus and Mars are about 10 light-minutes away from Earth. At times of superior conjunction, when Mars is on the far side of the sun, the Red Planet can be as many as 22 light-minutes away. The resulting 44-minute round-trip for radio signals presents serious challenges for future Mars explorers! We typically see Jupiter and Saturn as they were more than an hour ago. As a rule, using a telescope makes an object's light brighter and its image larger, but it doesn't shorten the light's travel time at all.

Looking into the past

The stars we can see — besides the sun — are much farther away than the planets, but every one of them is still a "neighbor" in our Milky Way galaxy. You might think that the brightest stars in the sky are the closest ones, and sometimes that's true. Vega, which shines overhead this month, is the fifth-brightest star in the heavens, and it's only 25 light-years away. Even closer is the winter star Sirius, the brightest star in the nighttime sky. Its light has been traveling for only 8.6 years.

Using your favorite astronomy app, you can sample some very old starlight with your naked eyes. Looking north, the star Mizar — which marks the bend in the handle of the Big Dipper — is 85.8 light-years away. The light we see from Polaris tonight began its journey in 1586, when Shakespeare and Galileo were living. High in the eastern evening sky, the constellation Cygnus (the swan) includes two bright and distant stars. Deneb, at the great bird's tail, is at least 1,550 light-years away. The light from the bright star Sadr, located only six degrees to the southwest,  has traveled for approximately 1,800 years. These two stars are much more luminous than the sun, allowing them to shine so brightly even at those enormous distances.

If a celestial object is big enough, it can be much farther away and still be visible to the naked eye. The Wild Duck Cluster (also known as Messier 11) is a bright concentration of stars in one of the galaxy's spiral arms that you can see with naked eyes under dark skies. Your sky charting app will point you to where it sits in the evening sky, about midway between the bright star Altair and Saturn. The cluster contains about 2,900 stars at a distance of more than 6,000 light-years! Use binoculars or a small telescope to get a better look. Use low magnification, though — it's about one-third of the moon's diameter across. [Stunning Photo Captures 'Wild Duck' Star Cluster in Flight]

Outside our neighborhood, there are globular star clusters — spherical concentrations of densely packed stars that orbit just outside our galaxy. The brightest one for skywatchers in North America is Messier 13, the Great Globular Cluster, located in the constellation Hercules. Its ancient, 23,000-year-old starlight appears as a dim, fuzzy patch to unaided eyes, and becomes a spectacular sight under magnification. Lucky observers in the Southern Hemisphere can also see Omega Centauri, the brightest globular cluster in the sky. At a "mere" 17,000 light-years away, it's worth a trip south of the equator.

Your astronomy app should list the distance to all of the prominent stars and deeper-sky objects. The SkySafari 5 search menu lets you search for the nearest or brightest star, as well as deep-sky objects, and includes the option to sort the lists and highlight the objects on the sky.

How far can you see?

Nearby galaxies are the farthest objects visible with unaided human eyes, and you can see them for yourself during the Northern Hemisphere's fall and winter months. The Andromeda galaxy (Messier 31) is a large, spiral galaxy nicely placed in the eastern evening sky. It's tilted obliquely in the sky so it forms a dim, elongated oval that brightens toward the core. A darker sky will show its true size — it's more than six full moon diameters across! And here's the amazing part: It is 2.5 million light-years away! When that light began its trip to Earth, Homo habilis (an early human species) was roaming Tanzania.

People have claimed to be able to see several other more distant galaxies under extremely dark skies, as well. Adding a telescope, you can see much further back in time. Here are a few suggestions for you to try with a backyard telescope. Your astronomy app will list many more. The objects with smaller visual magnitude values will be brighter and easier to see. None of them will appear very bright in the eyepiece, but you'll be exploring the universe in space and time.

With a very large telescope, astronomers can reach deeper into the distant past, nearly to the beginning of time. Over the course of a decade, NASA directed the Hubble Space Telescope to image a small, seemingly empty patch of sky in the constellation Fornax. By accumulating more than 2 million seconds of exposure time, in visible and other wavelengths of light, the telescope captured a scene containing thousands of galaxies, some of which are so distant that their light shows as they existed 13.2 billion years ago — only 500 million years after the Big Bang. The image, known as the Hubble eXtreme Deep Field, is only the beginning of this exploration. Its successor, the James Webb Space Telescope — scheduled to launch in 2018 — should see hundreds of millions of years farther back than that!

In future mobile astronomy columns, we'll look at how astronomers measure the distances to objects, review some new apps and gadgets, and more. Send me your suggestions! In the meantime, keep looking up!

Editor's note: Chris Vaughan is an astronomy public outreach and education specialist, and operator of the historic 1.88-meter David Dunlap Observatory telescope. You can reach him via email, and follow him on Twitter as @astrogeoguy, as well as on Facebook and Tumblr.