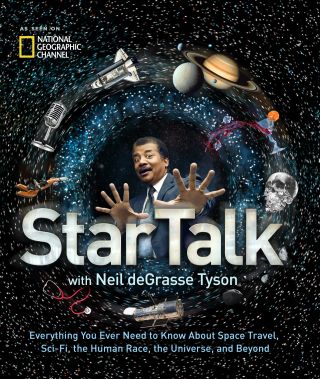 "StarTalk," a science-themed late-night talk show hosted by astrophysicist Neil deGrasse Tyson, is back for a third season, which will premiere Monday (Sept. 19) on the National Geographic Channel. The season begins just a few days after the first-ever "StarTalk" companion book hit shelves this Tuesday (Sept. 13).

The television series returns with popular-science superstar Neil deGrasse Tyson, who calls himself "your personal astrophysicist." Tyson's show blends pop culture with real science in thought-provoking and comical discussions with celebrity guests. Twenty episodes will air during Season 3, doubling the show's airtime from Seasons 1 and 2.

Season 3 kicks off with guest star Whoopi Goldberg. Other guests this season will include former astronaut (and second man to walk on the moon) Buzz Aldrin, Mayim Bialik of "The Big Bang Theory," theoretical physicist Brian Greene, actor and director Ben Stiller, actor Isaac Wright from "Game of Thrones," and several other celebrities, comedians and public figures.

A new companion book — titled "StarTalk: Everything You Ever Need to Know About Space Travel, Sci-Fi, the Human Race, the Universe, and Beyond" (National Geographic, 2016) — expands upon discussions from the television series as well as the original "StarTalk" podcast. The new book dives into deep scientific questions about space, Earth, humanity and the future while maintaining the show's characteristic comic relief.

Could Bigfoot be a space alien? Could Superman survive a black hole? Can science help you find true love? These are but a few of the burning questions that the new "StarTalk" book will answer. For more cool science discussions like these, tune in to "StarTalk" on the National Geographic Channel on Mondays at 11 p.m. ET.