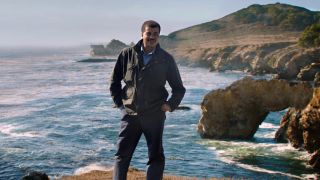 Astrophysicist Neil deGrasse Tyson in a scene from "Unafraid of the Dark," the final episode of "Cosmos: A Spacetime Odyssey." Tyson will receive the National Academy of Sciences' highest award, the Public Welfare Medal, on April 26, 2015.
(Image: © David Moir/FOX)

The U.S. National Academy of Sciences (NAS) will bestow its most prestigious award, the Public Welfare Medal, on astrophysicist Neil deGrasse Tyson for his extensive efforts to take science to the masses.

"Through just about every form of media available, Neil deGrasse Tyson has made millions of people around the world excited about science," NAS home secretary Susan Wessler, who served as chair of the award selection committee, said in a statement Thursday (Feb. 26). "Ultimately, the success of science depends on the public's understanding of its importance and value. Neil masterfully conveys why science matters — not just to a few, but to all of us."

The 56-year-old Tyson has also been a big presence on the small screen. For example, he hosted the 2004 "Nova: Origins" miniseries on PBS as well as "Cosmos: A Spacetime Odyssey," a 2014 documentary series that aired on Fox and the National Geographic Channel. He will also host "Star Talk," a talk show that will begin airing in April on the National Geographic Channel.

"Cosmos" was a reboot of the 1980 PBS series "Cosmos: A Personal Voyage," which was hosted by the late astronomer Carl Sagan (who won the Public Welfare Medal in 1994).

Tyson also gets the word out through Twitter; as of Thursday, he had tweeted more than 4,250 times to his 3.24 million followers.

"At a time when science is often misunderstood or ignored, Neil deGrasse Tyson is truly its most visible and most recognizable advocate," said NAS President Ralph Cicerone. "By personably and skillfully explaining the significance and the thrills of scientific discoveries, Neil has captured the public's imagination like no other scientist alive today. We are pleased to present him our highest award."