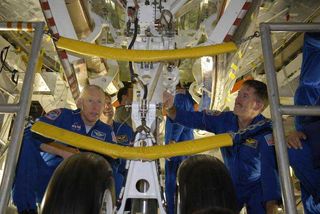 Six astronauts have two training-filled monthsahead as they prepare to haul new solar arrays towards the International SpaceStation (ISS) aboard NASA Atlantisorbiter in March.

Atlantis'STS-117 crew is slated to launch spaceward noearlier than 6:20 a.m. EDT (1020 GMT) on March 16 carrying the first starboardpair of U.S.-built solar arrays to the ISS [image].Riding up to the orbital laboratory with Sturckow and Archambault are missionspecialists James Reilly II, Patrick Forrester, Steven Swanson and John "Danny"Olivas [image].

The STS-117crew has several long mission simulations over the next few weeks, NASA spokesperson Kylie Clem, of theagency's Johnson Space Center training site in Houston, told SPACE.com.Among them is a multi-day session to first rehearse orbital inspections ofAtlantis' heat shield the day after launch, and then continue through ISSdocking activities on Flight Day 3 to the first of several planned spacewalksduring the mission, she added.

Archambaultsaid he and his crewmates paid close attention to NASA's Discoveryshuttle flight last month, in which the orbiter's STS-116astronaut crew wrangled the first P6 solararray into its storage boxes [image].

"We canbenefit their experience and make our solar array retraction go a little bitsmoother," Archambault said, adding that he and his crewmates also studied NASA'sSTS-115shuttle flight in September 2006, which deliveredtwo portside solar arrays. "We watched them very closely...a lot of the thingsthey did on that mission we're going to have to do mimic, but just on theopposite side of the space station."

The STS-117solar arrays are the third of four U.S.-built power-generating wings to launchtowards the ISS before the station's planned completion in 2010 [image].

"Before wecan expand the space station any further, and that is add any more laboratoriessuch the ColumbusEuropean laboratory and Japanese laboratory, we have to bring up thecapability to provide that power," said Archambault.

NASA isaiming to launch up to five shuttle flights in 2007, all of which aimed at ISSconstruction. The STS-117 spaceflight will mark Archambault's first spaceflightsince he joined NASA's Astronaut Corps in 1998.

"It's beena long wait," Archambault said. "But I'm sure the wait will have been worth it."