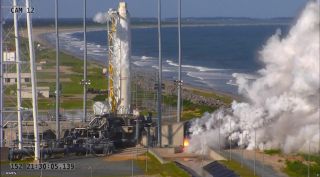 LANCASTER, Calif. — The first launch of an Orbital ATK Antares rocket with a new first stage engine will likely be delayed from July to August, the company said June 16.

In a statement to SpaceNews, Orbital ATK spokeswoman Sean Wilson said that the launch of the Antares carrying a Cygnus cargo spacecraft to the International Space Station will likely take place "in the August timeframe." That launch was previously scheduled for no earlier than early July.

"Our Antares team recently completed a successful stage test and is wrapping up the test data analysis," Wilson said, referring to a May 31 static fire test of the Antares first stage on the pad at the Mid-Atlantic Regional Spaceport on Wallops Island, Virginia. "Final trajectory shaping work is also currently underway, which is likely to result in an updated launch schedule in the August timeframe."

She declined to say if the delay was primarily caused by ISS schedule conflicts with other visiting vehicles or issues with the first stage after that static fire test. NASASpaceFlight.com, which first reported the potential delay June 15, cited vibrations during the static fire test that required updates to the vehicle's avionics.

The ISS has a busy schedule of other vehicles visiting the station. A Soyuz spacecraft carrying three new station crewmembers is scheduled for launch July 7, after being delayed from June 24 because of issues with the Soyuz's software. A Progress cargo mission was also delayed to July 17.

A SpaceX Falcon 9 is scheduled to launch a Dragon cargo spacecraft to the station early July 16. That launch appears to remain on schedule despite its proximity to the Progress mission, with NASA recently promoting social media events associated with the launch.

The Antares launch of a Cygnus, on a mission designated OA-5, will be the first for the Antares with new RD-181 first stage engines. Orbital ATK replaced the AJ26 engines, provided by Aerojet Rocketdyne, after they were implicated the failure of the previous Antares launch in October 2014. The RD-181 engines, manufactured by Russian company NPO Energomash, also increase the payload capacity of the Antares.

Wilson said that an updated launch date for the OA-5 mission, "which takes into account the space station traffic schedule and cargo requirements, will be made in conjunction with NASA in the next several weeks."