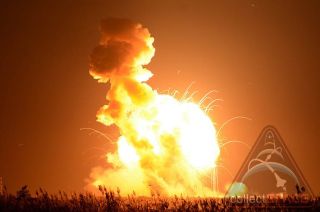 Orbital Sciences' Antares rocket explodes shortly after lifting off from NASA's Wallops Flight Facility in Virginia on Oct. 28, 2014. The launch was supposed to send Orbital's Cygnus spacecraft on a cargo run to the International Space Station for NASA.
(Image: © collectSPACE.com/Robert Pearlman)

Orbital's unmanned Antares rocket exploded in a brilliant fireball shortly after launching from NASA's Wallops Flight Facility in Virginia at 6:22 p.m. EDT (2222 GMT), crashing back down to the launch pad in a flaming heap. The Antares was carrying Orbital's unmanned Cygnus spacecraft, which was toting 5,000 pounds (2,268 kilograms) of food, scientific experiments and other supplies on this flight — the third cargo mission to the space station under a $1.9 billion contract the company holds with NASA. You can see photos of the Antares rocket explosion here.

A NASA spokesman described the explosion as a "catastrophic anomaly" during a NASA TV webcast. While the assessment and investigation of the accident have just begun, NASA emergency operations officials report no injuries, Orbital Sciences representatives said. Property damage is limited to the south end of Wallops Island, they added. [Listen to a first-hand account of the rocket explosion]

"It is far too early to know the details of what happened," Orbital executive vice president Frank Culbertson, a former NASA astronaut, said in a statement. "We will conduct a thorough investigation immediately to determine the cause of this failure and what steps can be taken to avoid a repeat of this incident. As soon as we understand the cause we will begin the necessary work to return to flight to support our customers and the nation’s space program."

The combined value of the Antares and Cygnus lost during Tuesday's mishap is about $200 million, Culbertson said during a post-crash news conference Tuesday.

People who live near Wallops have been warned not to touch any objects that may be pieces of the Antares rocket, as such debris could be contaminated with rocket fuel or other hazardous material. If you find something that may be Antares debris, call NASA's incident response team at (757) 824-1295.

Orbital Sciences representatives were tracking no problems in the leadup to the launch. But upon ignition it soon became clear that something was wrong, said Robert Pearlman, editor of the space history news website collectSPACE.com (a Space.com partner). Pearlman watched the launch failure from just a few miles away at NASA's press site observation area.

"As the vehicle was climbing off the pad, there was something trailing — a smoke and fire plume from the rocket itself — trailing from the rocket all the way up," Pearlman told Space.com. "As it cleared the top of the water tower, there was a clear break-apart, and the booster's integrity failed. There was then a tremendous fireball, trailed by a very loud explosion. Parts were sent flying everywhere, and then the vehicle fell back to the pad, exploding in an even larger fireball, setting the entire area on fire."

Tuesday night's launch try was Orbital's second attempt to launch the Antares rocket in two days. A launch attempt on Monday night was scrubbed when a boat wandered into the launch range safety area offshore.

NASA has tapped Orbital Sciences to provide eight cargo delivery missions to the International Space Station using the company's Antares rockets and unmanned Cygnus spacecraft. The Virginia-based company launched its first official cargo mission to the space station earlier this year in January, with a second mission following in July. Both missions, as well as two test flights in 2013, were a success.

California-based SpaceX holds a $1.6 billion NASA resupply deal to make 12 robotic flights to the orbiting lab using its Dragon capsule and Falcon 9 rocket. To date, SpaceX has flown four of these missions without incident.

NASA is looking to the private sector to fly both supplies and astronauts to and from the space station. Last month, the space agency awarded multibillion-dollar deals to SpaceX and Boeing to develop their astronaut taxis, with the hope that one or both private spaceships will be up and running by 2017. (NASA has been reliant on Russian Soyuz spacecraft to fly its astronauts to and from orbit since the retirement of the space shuttle fleet in 2011.)

Tuesday's Antares explosion does not endanger the astronauts aboard the International Space Station, who have plenty of food, water and other critical supplies, NASA officials said. In addition, a Russian robotic cargo craft known as Progress is scheduled to launch toward the International Space Station early Wednesday (Oct. 29) from Baikonur Cosmodrome in Kazakhstan.

Orbital Sciences' two-stage Antares rocket stands 133 feet (40 meters) tall. Tuesday's attempted launch was the first to use an upgraded, more powerful version of Antares' Castor 30XL second-stage motor, company representatives have said, but it is unknown at the moment if this motor was involved in the launch anomaly in any way.

Editor's Note: This report was updated at 2:45 a.m. EDT on Wednesday (Oct. 29). It will continue to be updated as new details on the Antares launch failure become available.