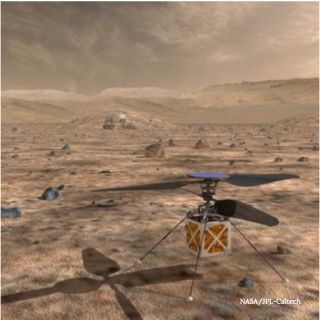 NASA is considering sending a miniature helicopter to Mars to serve as an aerial scout for its Mars 2020 rover.

The helicopter, which is intended primarily as a technology demonstrator, would be the first vehicle to traverse through the thin Martian atmosphere.

Flying on Mars is a challenge. The planet's atmospheric pressure is just one percent that of Earth's so the aircraft needs relatively big blades compared to the size of its body.

"The way any of these helicopters work is the rotor blades spin up and they produce lift because of the density of the atmosphere. So once you lose that density, you've got to spin even faster or get bigger rotor blades or get lighter," Mike Meacham, a mechanical engineer at NASA's Jet Propulsion Laboratory in Pasadena, Calif., said in a NASA video about the project.

WATCH VIDEO: Mars Life May be Frozen in Glass

The Mars helicopter being tested at JPL is a 2.2-pound cube about the size of a tissue box with blades that span 3.6 feet from tip to tip.

If approved, the helicopter would piggyback a ride aboard the Mars 2020 rover, then separate after landing.

NASA would use the solar-powered helicopter, which would be outfitted with GoPro-type cameras, to scout safe and efficient routes for the rover. It should have enough power to make two- to three-minute flights every day covering about 550 yards per sortie.

RELATED: Aerial Drone to Hunt for Life on Mars

"Because this thing is going to take off every day and land every day, we want to make sure we have a bulletproof landing system, and landing is the riskiest part of any mission," said Bob Balaram, chief engineer of mobility and robotics systems at JPL.

NASA figures the helicopter could allow the rover to cover three times more territory in a day than if ground control teams relied only on the rover's onboard cameras and images from orbiting satellites to plot the path.

"With the helicopter, you can build up your terrain paths much more," Jim Green, head of NASA's Planetary Science division, told a science advisory panel last week.

The helicopter also can moonlight as the rover's official photographer, taking spacecraft "selfies" to a whole new level, Green added.