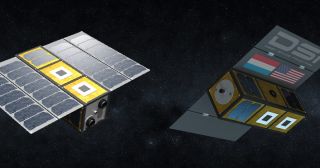 PARIS—The Luxembourg government on June 3 reaffirmed and strengthened its backing for a homegrown space-mining industry, saying it would invest more than $200 million in research, technology demonstration and in the direct purchase of equity in companies relocating to Luxembourg.

In a demonstration of the depth of the political backing the spaceresources.lu project now enjoys, Luxembourg Prime Minister Xavier Bettel and Deputy Prime Minister Etienne Schneider addressed a press briefing following the initiative's first board meeting.

Schneider said the government has set aside an initial 200 million euros ($225 million) to cover early costs associated with the space-mining venture. In statements that could have come from a private-equity company, he said Luxembourg would not limit itself to supporting research and development. He stressed that the 200-million-euro budget was only the start of the government's financial support for space mining.

Purchasing equity in promising early-stage companies offers the government a long-term return on its investment – an ability to benefit from the upside, he said.

Schneider and Bettel said the government would be crafting a Luxembourg Space Act, which they said should be enacted into law by the end of this year, that would give legal protection to space mining companies recovering and exploiting for profit raw materials taken from the Moon, asteroids or any other celestial body.

One Luxembourg official said the initiative has the stated support of all three political parties in Luxembourg's ruling coalition. Schneider and Bettel represent two of them.

Luxembourg to take advantage of limitation in U.S. law

"Why should companies invest in Luxembourg when they can do it in the United States, where maybe there is more know-how and a bigger community to engage in this business?" Schneider said.

"The Luxembourg Space Act will be open to all investors which will be located over here, in Luxembourg. That's a huge difference for investors – also to American companies or startups, which one day will have to get new capital – money to get really launched. If they don't find American capital they will have a problem and they will maybe look for another nation where they can have international capital and grow.

"I don't know why the Americans limited themselves to American capital, but we will not. We will be what we have been, an international place for international investment. Luxembourg has the ability to become the Silicon Valley for space resources. That is our aim for the years to come."

Luxembourg and Deep Space Industries have an agreement under which the company's Prospector-X nanosatellite will be co-funded by the Luxembourg government to test asteroid-rendezvous technologies.

Dordain's successor at ESA, Johann-Dietrich Woerner, suggested on June 1 during a briefing at ILA 2016, the Berlin air show, that the agency was skeptical about what Luxembourg was doing.

"We have no formalized position on that," Woerner said. "From my personal point of view, it's interesting what Luxembourg is doing. There are some thoughts about whether it's the right solution, just to go to bodies in our solar system to get resources. But I'm quite sure that as soon as it's affordable, it will be done. It's not our playground so there is no official position so far from ESA."

Schneider said several individual ESA nations have expressed interest in the project and that he would discuss it with them in December on the margins of the ESA ministerial conference in December in Lucerne, Switzerland. Luxembourg and Switzerland are co-chairing the meeting.

Dordain said the initiative's board meeting concluded with an agreement that the program needed to move quickly, attracting young engineers to Luxembourg to work on it and setting a three-year deadline for assessing the first results.