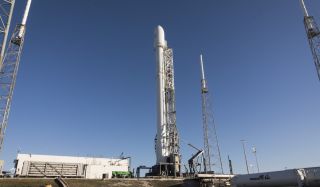 WASHINGTON — SpaceX has scheduled the launch of its first Falcon 9 mission since a June failure for Dec. 20 after completing a static-fire test of the vehicle on the launch pad late Dec. 18, a flight that will also include an attempted landing of the rocket’s first stage back at Cape Canaveral.

SpaceX Chief Executive Elon Musk reported on Twitter shortly after 7 p.m. Eastern that the company had completed a brief test fire of the rocket’s nine main engines on the launch pad at Cape Canaveral.

Musk confirmed the launch date in a tweet early Dec. 19, adding that SpaceX would also attempt a landing of the rocket’s first stage back at the Cape.

The static fire test was originally scheduled for Dec. 16, followed by a launch Dec. 19. However, SpaceX rescheduled the test for Dec. 17, and then delayed it to Dec. 18 after problems Musk said were caused by the use of supercooled liquid oxygen propellant, one of a number of changes SpaceX has made to the upgraded Falcon 9. Musk also reported technical problems with static fire attempts earlier Dec. 18 prior to the successful test.

The launch, carrying 11 Orbcomm satellites, will be the first for the upgraded Falcon 9. The launch will also be the first for SpaceX since the June 28 failure of a Falcon 9 version 1.1 carrying a Dragon cargo spacecraft to the International Space Station. SpaceX later said a strut in the rocket’s upper stage broke during the vehicle’s ascent, setting off a chain of events that caused its destruction.

SpaceX also expects use the launch to attempt a landing of the rocket’s first stage, part of the company’s efforts to develop a reusable version of the Falcon 9. "SpaceX is attempting a secondary test objective of landing the first stage of the Falcon 9 rocket on land for the first time at SpaceX’s Landing Zone 1," the company said in a Dec. 19 press release. That landing site is a decommissioned launch site at Cape Canaveral originally called Launch Complex 13.

The SpaceX statement adds that some residents in communities near Cape Canaveral may hear a sonic boom during the landing attempt, "although what residents experience will depend on weather conditions and other factors."