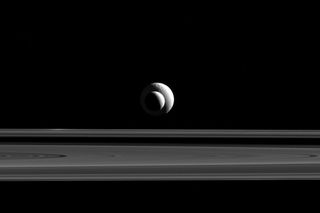 NASA's Cassini spacecraft has been in Saturn orbit for over a decade and it has seen the whole spectrum of ringed planet delights. But there are few views in Saturnian orbit that are more satisfying than seeing two or more moons in the same frame — particularly when they align.

In this stunning example of celestial good timing on Sept. 24, Cassini snapped Enceladus drift in front of larger moon Tethys in near-perfect alignment. Interestingly, the size difference between the two moons closely reflect their relative differences in diameter. Enceladus is 313 miles (504 kilometers) across whereas Tethys is 660 miles (1,062 kilometers) across.

Enceladus is of huge scientific interest to NASA and the Cassini mission. Now known to contain a sub-surface ocean beneath an icy crust, the small moon is thought to possess the ingredients for life. Cassini is currently lining up for its last ever flyby of Enceladus on Dec. 19, an encounter known as E-22 (the 22nd flyby), coming within 3,106 miles (4,999 kilometers) of the moon's surface.