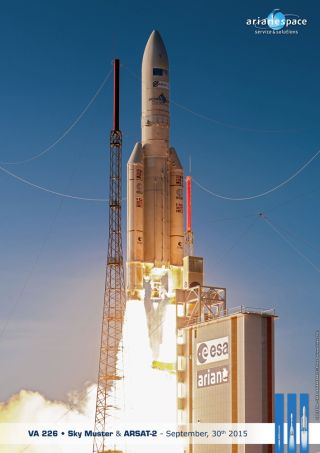 Ariane 5 lifts off with Sky Muster and ARSAT-2 satellites from Europe's spaceport on Sept. 30, 2015.
(Image: © Arianespace)

The satellites — the first of two Sky Muster Ka-band broadband satellites for Australia's NBN Co. and the Arsat-2 Ku- and C-band telecommunications satellite for Arsat of Argentina — were both reported by their owners to be healthy in orbit and sending signals.

The launch was an illustration of the widening diversity of commercial telecommunications platforms. Sky Muster, built by SSL of Palo Alto, California, weighed 6,440 kilograms at launch and is equipped with the equivalent of 202 Ka-band transponders operating through 101 spot beams.

It is designed to deliver 16.4 kilowatts of power to its payload toward the end of its operational life, estimated at more than 15 years. It will operate from 140 degrees east.

Arsat-2, the showcase product in Argentina's growing space-development program, was built by the government-owned INVAP — with the payload provided by Thales Alenia Space of France and Italy — and weighed 2,977 kilograms at launch. It carries 26 Ku-band and 10 C-band transponders and is designed to provide 4.6 kilowatts of power at the end of its 15-year life. Arsat-2 will operate from 81 degrees west. [Satellite Quiz: Test Your Space Smarts]

In a move that the superstitious would have disapproved — and there are more superstitious space-industry personnel than one might expect — Arsat contracted with the Arianespace launch consortium before the launch Arsat-2 launch to launch Arsat-3 in 2019.

The contract includes options for two other Arsat launches between 2020 and 2023.

Argentine officials have said they are determined not to lose access to geostationary orbital slots available to them. Under international regulations, orbital slot reservations expire if they are unused for several years and are then available to others.

The first Arsat satellite, Arsat-1, was launched aboard an Ariane 5 in October 2014.

Arsat Chief Executive Matias Bianchi said after the launch that decisions by successive Argentine governments to invest in a domestic space technology base have resulted in Argentina’s becoming independent in satellite production even as it secures long-term access to orbital real estate.

Bianchi said 30 percent of Arsat-2 had been booked before the launch.

Befitting its ambition — two satellites, 10 gateway Earth stations, each with 13-meter-diameter dishes for a total capital investment of $1.2 billion — the satellite piece of the network has been more controversial politically than any other telecommunications satellite effort.

Election campaigns featured arguments over the wisdom of offering what was sometimes called a "gold-plated service."

Australia's total population is about 23.5 million. The satellite network is designed to reach 200,000 homes and small businesses in Australia’s vast rural areas beyond the reach of terrestrial links.

Rural broadband-access programs are common in many regions, but because of Australia's size, the investment required to guarantee service to the most remote locations works out to about $6,000 per home. Installation of the dish antenna at each residence is eligible for a subsidy that is included in the overall program budget.

NBN Chairman Ziggy Switkowski, who attended the launch at Europe's Guiana Space Center, on the northeast coast of South America, said the $1.2 billion expense delivered a program that is on schedule and on budget. The second Sky Muster satellite is scheduled for launch in late 2016.

NBN is offering customers in areas eligible for satellite links — to assure the capacity is available for the intended users, NBN has produced detailed maps of who will be allowed to receive it — two packages. One offers downlinks at 12 megabits per second and a 1-megabit-per-second uplink, while the other offers 25 megabits-per-second downlinks and uplinks at 5 megabits per second.