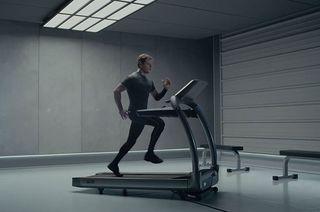 There is now a new way to dress like an astronaut, or at least a fictional future Mars crew member, thanks to a joint marketing promotion between the movie "The Martian" and the sports outfitter Under Armour.

A new teaser video released online on Wednesday (Sept. 9) not only advertised the 20th Century Fox film opening in theaters on Oct. 2, but also Under Armour's apparel as the choice of the film's NASA astronauts.

In the minute and 15 second-long clip, actor Matt Damon, as Ares 3 crew member Mark Watney, is seen undergoing physical training for his journey to Mars while dressed in Under Armour's basewear, including compression leggings and shirt. Close-up shots focus in on the company's logo and a slide at the video's end identifies Under Armour as the "Official Training Partner of the Ares Program." [See Photos from Ridley Scott's 'The Martian']

"As brands go, I can't think of a better partner for this mission," said Watney in an Under Armour release dated Sep. 9, 2035, blurring the line between the film and reality. "Their mantra of hard work and accomplishment speaks to everything it means to become an astronaut."

In addition to the clothing seen in the short video, Under Armour is now selling "official mission gear" to "show your support for the crew of the Hermes," the spacecraft from "The Martian." The new offerings include shirts bearing the Ares 3 mission patch and logotype from the movie.

The product placement comes as the result of a different partnership, this one between RSA Films, the commercial production company founded by "Martian" director Ridley Scott, and movie ad agency Wild Card. Together as 3AM, the venture specializes in creating integrated content by tapping into the early stages of film development.

For "The Martian," 3AM developed a series of viral videos that present the Ares 3 mission as if it was preparing to launch today. Previously posted clips have provided a tour of the Hermes and a look at the crew's isolation training, as well as an episode of National Geographic's StarTalk, hosted by real-life astrophysicist Neil deGrasse Tyson.

For the new Under Armour clip, 3AM imagined how a Mars crew might fit into today's pop culture.

"We asked ourselves what it would look like if we took the pop culture appeal of Apollo and Mercury-era astronauts and infused that world with today's hyper-connected social media culture," Chris Eyerman, creative director at 3AM, told Fast Company's Co.Create. "We would probably see these astronauts being sponsored by brands."

The Under Armour t-shirts are the first "Martian" branded products to be announced. The film, based on a book by Andy Weir of the same title, follows Watney (Damon) after he is stranded on Mars and struggles to survive. The star-studded cast includes Jessica Chastain as the leader of the Ares 3 mission and Jeff Daniels as NASA's director.

For more about the Ares 3 mission gear, see Under Armour's website at: underarmour.com.