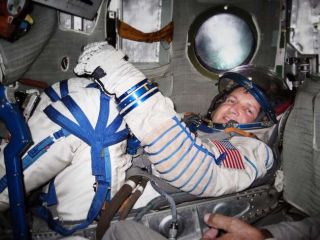 With a March2007 spaceflight in hand, American spacetourist-in-training Charles Simonyicelebrated with a launch of his own Thursday as he debuted a personal websitewhere he'll document his trek to the International SpaceStation (ISS).

Simonyi[image], 58, is now set to launch towards the ISS on March 9, 2007 aboard a Russian-builtSoyuz TMA-10 spacecraft that will also ferry twoExpedition 15 cosmonauts to the orbital laboratory. He plans to lay downhis training and flight experiences on the Internet at his website: www.charlesinspace.com.

"I want toshare all that I learn with everybody, especially with kids so that they maybecome more involved with space sciences," said Simonyi, a former Microsoftsoftware developer and co-founder of Intentional Software Corp., during aThursday press conference at the Museum of Flight in Seattle, Washington. "I amvery honored and excited to be joining the Soyuz TMA-10 mission."

Simonyi'strip is the result of a deal between Russia's Federal Space Agency and theVirginia-based firm Space Adventures, which has arranged ISS-bound flights forfour paying customers - most recently U.S. entrepreneur AnoushehAnsari - since 2001.

Previousspace tourist treks to the ISS were estimated to cost about $20 million, butthat price tag is rising to $25 million, Space Adventures president and CEO EricAnderson said.

"It will besafe to say that Charles is paying a little more than $20 million, but not morethan $25 million," Anderson said during the briefing.

For his fee,Simonyi will spend an intense six months training for a 10-day spaceflight thatincludes eight days aboard the ISS. He will launch towards the space station withExpedition 15 commander FyodorYurchikhin and flight engineer Oleg Kotov, and return with Expedition14 commander MichaelLopez-Alegria and flight engineer MikhailTyurin.

Theupcoming spaceflight appears to be the culmination of a lifelong interest forSimonyi who--at age 13 in 1963--was selected as his native country Hungary's JuniorAstronaut and sent to Moscow, where he met cosmonaut PavelPopovich.

"Naturally I was interestedin space," Simonyi said. "I was so interested I learned the names of all the spacedogs."

A dedicated flyer, Simonyihas racked up more than 2,000 hours piloting jets and helicopters and said hisfamily supports his upcoming space shot. He added that he will dedicate themission towards the advancement of civilian spaceflight while serving as a testsubject for biomedical experiments and working to inspire today's youth.

"Space isan adventure," Simonyi said. "I think it is a very good hook to get kidsinvolved."

There is apossibility that Simonyi's flight may be delayed to early April. The Russiannews wire service Ria Novosti reported last week that Federal SpaceAgency officials were discussing whether to delay the mission to avoid theflooding season at the Kazakhstan landing site where Simonyi and the Expedition14 astronauts will touch down.

But NASA spokesperson Kylie Clem at theJohnson Space Center told SPACE.com that those discussions are still ongoingand far from final.

In themeantime, Simonyi is due to head back to Russia's Yuri Gagarin CosmonautTraining Center in Star City on Saturday to resume work.

"Mytraining is rigorous," said Simonyi, who is working hard to add Russian to the wideranks of languages in which he is fluent on top of his physical exercise. "I'mreally enjoying it."